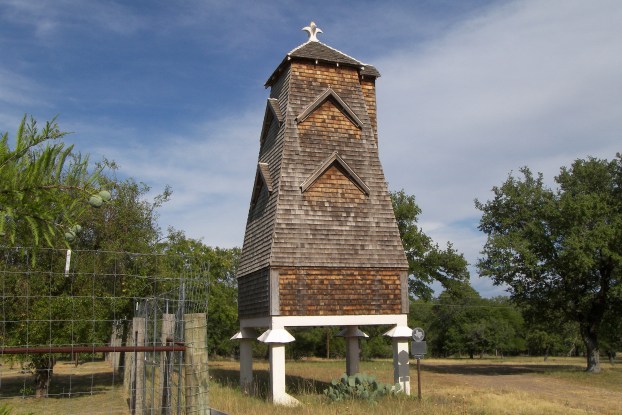 And Now You Know: Hygieostatic bat roost? Orange has one….

Between 1900 and 1910, Dr. Charles A. R. Campbell of San Antonio constructed Hygieostatic Bat Towers he designed as part of a program to eradicate, or at least control, malaria by attracting mosquito-eating bats. The towers would serve as homes for colonies of bats.

The towers were silo-like, about 50 feet tall, covered in cedar with one side covered from top to bottom with a row of louvered slats.

The hope was that the towers would attract bats to live in areas with high populations of mosquitoes. A side to attracting bat populations would be that the colony of bats would produce guano, a high-grade fertilizer which comes from bat droppings.

Campbell built 16 of the structures in strategic locations including the Panama Canal Zone, Italy, Florida, and Texas.

He built his first tower at the San Antonio Fairgrounds in 1907. He hung hams inside to try to attract bats. It attracted no bats and was torn down a few years later for scrap lumber.

In 1911, he built another tower at Mitchell Lakes, a swampy area south of the city.

This time inside he used a “secret substance” he created. It seemed to attract bats.

A couple of years later, Campbell produced documents containing statements from area residents stating the mosquito population and incidence of malaria had been reduced.

These statements seemed to validate Campbell’s claims and establish his reputation.

He wrote a book on the subject, built other towers around the area, and answered inquiries from around the world.

In 1919, the Texas Legislature nominated Dr. Campbell for the Nobel Prize.

In 1988, Eric Gerber, a writer for the Houston Post, wrote an article about the bat roosts. He wrote the only bat tower remaining in Texas was located at Comfort, Texas.

Emmett A. McCoppin who lived in Houston was a descendant of the Depwe family of Orange. His mother was Mollie Depwe McCoppin. Along with other family members she was buried in the Depwe Cemetery. The cemetery is located in Shangri-La, the nature garden constructed by Lutcher Stark.

McCoppin wrote Gerber and told him there was a bat tower located in Orange, Texas near the cemetery his family was buried in. If Gerber cared to venture to Orange, McCoppin would show him the tower. The tower was not accessible to the public since it was located on Stark’s property inside Shangri-La.

Gerber accepted McCoppin’s offer and the two men arranged to meet Homer Stark, Lutcher’s son, in Orange. Homer Stark would be the “guide” for the tour.

When the three men met, Stark told them that his memory was a bit vague, but he thought the tower was built about 1930 by “a man from England.” He did not believe the tower had ever attracted very many bats. The tower was probably built to also harvest the rich bat guano to fertilize Lutcher Starks orchards and plants as much as it was to control mosquitos.

Gerber had been skeptical about the tower actually being a bat tower of Campbell’s design. After he saw it, he was convinced that it indeed was a tower-like Campbell’s and the tower in Comfort was not the only one remaining in Texas. He knew now there were two.

Gerber wrote another article in the Post describing his trip to meet with McCoppin and Stark. He described the tower as being shaped like an upside-down thimble standing on concrete piers. The tower rose to about the height of a two-story building. There was an opening about halfway up for the bats to enter and exit.

On the bottom was a trapdoor which could be opened to remove the bat droppings.

The original tower near Depwe Cemetery is no longer standing. Gerber was right; years of neglect led to the tower having to be torn down.

Today, there is another bat tower in Orange. It is located on the north end of Shangri-La. The location is where Sunset Drive ends at Park Avenue. The tower sits on the open land behind the vegetation-covered fence. It is visible through the locked gate, but just barely.

The design appears to be duplicated from the original tower. Whether or not it has attracted bats is not easy to see since the tower is located nearly 100 yards inside the fence.

The bat tower at Comfort was built in 1918 and had a Texas Historical Marker erected at its site in 1981. It is said to be in near perfect condition. This tower is the oldest of the three towers that remain standing.

The bat tower in Orange is recognized today as one of two standing in Texas. There is a third tower at Sugarloaf Key in Monroe County, Florida. A fourth tower in Temple Terrace, Florida was burned by arsonists in 1979.

These towers are the only ones remaining of the 16 that Dr. Campbell built between 1907 and 1929 in the United States and Italy. There were seven built in Texas.

The towers were built in an attempt to reduce malaria that posed a threat to the southern United States. How much effect they really had, no one is certain.

US Consul General is slain in Syria. Notorious Gangster Al Brady was gunned down in Maine, FDR is expected to... read more