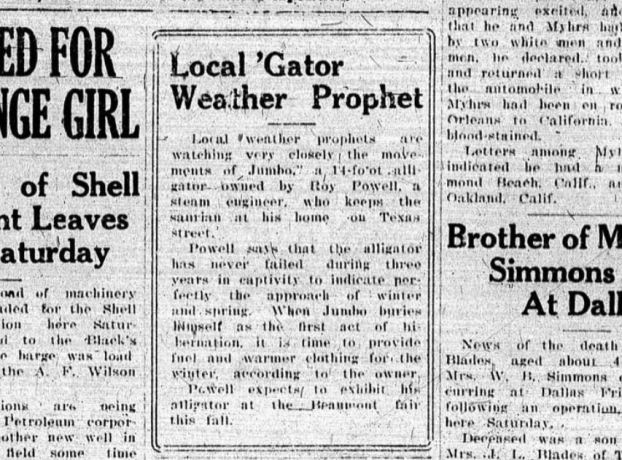 News in late September 1930 was another example of different things going on in Orange. Oranges, pecans, ancient Greeks, and a weather forecasting alligator all made the front page.

Joseph Kostrzewski was called ‘The Orange King of this country” due to the number of orange trees he had and the huge crops they produced each year. The past winter of 1930 was the coldest winter in the history of Orange County. His trees were damaged, the production of oranges suffered, and so did his income.

Kostrzewski decided to replace 2,000 of his 10,000 orange trees with pecan trees. Pecan trees can withstand cold weather and are not affected by a freeze such as the past one.

He has converted 26 acres of his 325-acre tract five miles north of Orange to growing pecans rather than oranges.

“In other news”, it was reported by scouts for the trappers of Orange County that the outlook for taking fur-bearing animals looked good this year. There was an abundance of plant food that would make for a thriving muskrat population. There has also been an abundance of rainfall that provided fresh water for all animals of the marshes.

“Greek gymnastics” would be part of the upcoming school year. The gymnastics would be performed in the open air in the manner of the ancient Greeks.

State legislation was passed that made physical education compulsory and as important as “learning Latin verbs.” Orange schools would be conforming with the state laws that make the development of the child’s physique important to both boys and girls.

For the first year, it would be required that every high school girl, except those with necessary health exemptions, participate in this outdoor gymnasium.

Physical training for girls will include open-air drills, outdoor games, outdoor recreation, and all types of supervised outdoor play.

Miss Bertie Cherico will direct a formal syllabus of physical education in addition to teaching a history class.

Physical training for the boys will be under the direction of George A. Newton, the new athletic director, and coach, who also happens to be an Oxford University Fellow.

It was reported that the school enrollment increased from an initial enrollment of 1,026 students to 1,740 students. The increase in enrollment meant that three new teachers would be needed.

The first three miles of pavement on the levee road through the marsh between the Sabine River and Blue Lake was ready for use on September 14, 1930.

Representatives of the Lawrence Paving Company, a contractor for the Louisiana Highway Department said the first mile was completed Monday, September 8, and was ready for use after the proper curing time.

Those interested in the approach of winter weather were paying close attention to Jumbo. Jumbo is a 14-foot alligator that is owned by Roy Powell. Powell keeps the huge alligator at his home on Texas Street.

Powell says that the alligator has never failed, during his three years of captivity, to perfectly indicate the approach of winter and spring weather.

Powell has indicated that he was going to exhibit Jumbo at the annual fall fair at Beaumont this fall.

Texas Baptist Men Disaster Relief teams are in the area providing help. We can assist you and your community with... read more