And Now You Know As the navy leaves Orange, an era ends 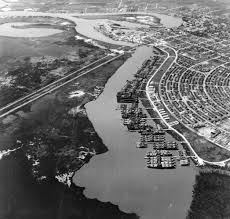 (editors note, this is the second in a two-part series. Part one can be read here)

In 1974, the U.S. Navy sent notice to the City of Orange, stating as of June 30, 1976, the inactive ship maintenance base would be closed. The notice also stated the ships would be removed by the end of 1976.

This document signaled the end of a 34-year relationship between the U.S. Navy and the City of Orange. It also meant that personal relationships between naval personnel and citizens of Orange would be ending.

The lines of grey naval vessels along Destroyer Street behind the heavy chain link fence would soon disappear. There would be a void in Orange, and for some, a sense of personal loss.

The Navy adopted a policy in 1974 that ships would be deactivated in their home ports. The base at Orange was too remote. There were no vessels homeported anywhere near Orange. The base would no longer be needed. It would become surplus property.

The base had been slowly downsizing. Over several years, naval personnel had been reduced and about 100 civilian jobs had been eliminated.

In 1974, Commander John H. Vosseller had been assigned base commander. Under his command were only 24 naval personnel and 68 civilian employees.

Closing the base would reduce the navy’s annual expenditure by $631,000. The loss would hurt Orange. Businesses, that for three decades, had been supplying supplies to the base and personal goods to the base personnel, both naval and civilian, would lose an important source of revenue.

For nearly two years, plans had been moving forward to close the base. It soon became evident all of the ships could not be moved out by the end of 1976. It would take five years until the last ship was moved from Orange.

The Navy could not sell its ships as “scrap” in the sense that the ships could be sent to breakers and cut down into scrap metal. “Scrapped ships” could be sold to allied navies once they were decommissioned and struck from Navy records.

In the 1970s, U.S. Navy uniforms became scarce around Orange. The uniformed sailors now being seen in Orange were from countries like Mexico, Korea, Nationalist China, and South American countries, notably Peru and Ecuador.

The destroyers, destroyer escorts, and minesweepers were the first to be sold off with the auxiliary ships, drydocks, and floating shops being sold off in time.

The vacant base began to be sold in parcels.

U.S. Steel acquired some acreage for its American Bridge facility.

The Orange County Navigation and Port District bought buildings and land along the river where the piers were located.

A small portion of land was deeded to Lamar University.

The Navy kept 18.5 acres for use as the U.S. Navy and Marine Corps Reserve Training Center. Eventually, the Navy closed the Reserve Center and sold that property.

Today, with the exception of the portion that became part of American Bridge, very little of the old base is still used as it was at the time of its demise.

A few of the original warehouses and shops still stand. The originals from the navy days are square built with a pitched roof and are easy to distinguish from the newer shops. Some are leased to personal businesses.

One old shop was used for a local boxing club. Another was a facility operated by Lamar Orange for the training of welders.

The old power plant building was stripped of all its equipment. The Southeast Texas Vietnam Veterans Association then used the vacated building. Due to storm damage the building was torn down several years ago.

Of the 12 piers once standing in the river, which were the last berths for so many ships, only one remains in occasional use.

The other 11 were not used and allowed to rot and fall into the river and become a menace to local boaters until the concrete, rotten wood, and pilings were removed. Only the concrete ramps up the levee to the piers remain, along with a few stumps of the pilings.

The barracks building has been used as office space and for housing for personnel coming into Orange to assist with rebuilding efforts after the last storms.

Thousands of people attend events held on the river today. Few realize the street from Simmons Drive to the boat ramp and the parking area crosses the site of Riverside, once the largest housing project built in the United States.

When they reach the river and turn right toward the boat ramp, they are on the site of what was once the largest naval base of its type in the world.

The parcels of land are two of the sites which once made Orange a unique city.