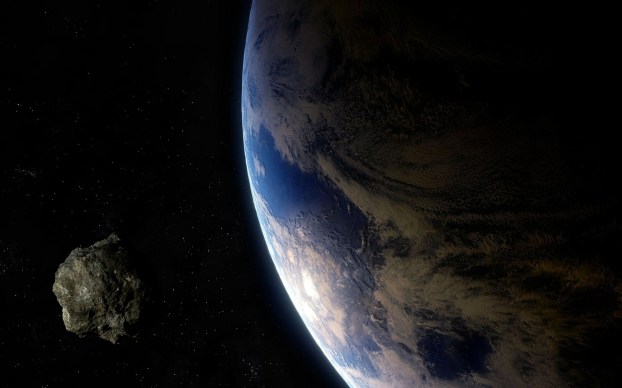 A huge asteroid flew by earth on Saturday

For those of you who read this column on a regular basis, know that I am a “closet doomsayer”.

I get excited about things I think might pertain to the scriptures and end times, even if the scripture is really scary.  I think of the book of Revelation as a mystery novel and I try and solve it before the end.

Revelation 8:8-9 states: “The second angel sounded his trumpet, and something like a huge mountain, all ablaze, was thrown into the sea.  A third of the sea turned into blood, a third of the living creatures in the sea died, and a third of the ships were destroyed.”

A space rock known as 467317 (2000 QW7), is estimated to be anywhere from around 3,000 feet to nearly a mile and a half wide, putting it in the running to be one of the more frightening space rocks to show its face near our planet.

This space rock flew by Earth on September 14, 2019, just as if it were a normal occurrence.

But it wasn’t normal.

Even though there was no chance of the rock hitting earth, it is the closest asteroid to come near earth.

Revelation 8:10 states – “The third angel sounded his trumpet, and a great star, blazing like a torch, fell from the sky on a third of the rivers and on the springs of water— 11 the name of the star is Wormwood.  A third of the waters turned bitter, and many people died from the waters that had become bitter.”

Astronomers also spotted a comet that appears to have come from outside our solar system, which would make it the second interstellar object they have detected.  Plus, it’s headed toward Earth, which will make it easier for Astronomers to study than the previous interstellar rock. It will approach Earth in December, and like the Asteroid, it will get nowhere near close enough to hit us.

But can you see the correlation between these asteroid/comet, and these scriptures?

You’re probably asking yourself why am I talking about this?  All of this stuff will probably happen after the rapture. (I say probably because I don’t want to get into a debate about that subject.)

I just know many years ago, people could not understand the scriptures in Revelations because we did not have the scientific capability to see things like we can now.  We thought the book of Revelation was fantasy and far-fetched.

Now we can see how it can unfold and happen.

The book of Revelation is at least 2000 years old, so to say the contents was written before its time is an understatement.

God allowed John to see all these things and burned them into his brain in order to write about them; so we can see how great God is.  There is no way John could have made up the things that are described in Revelation without God’s intervention.

God chooses to give us “peeks” into our future for a reason.

Read the book of Revelation and find out what’s in it for you.   Mystery, intrigue; it should be on the New York Best Seller list.

By Lewis Waha   If people fear what they don’t understand, then one of the most feared things today is religious... read more