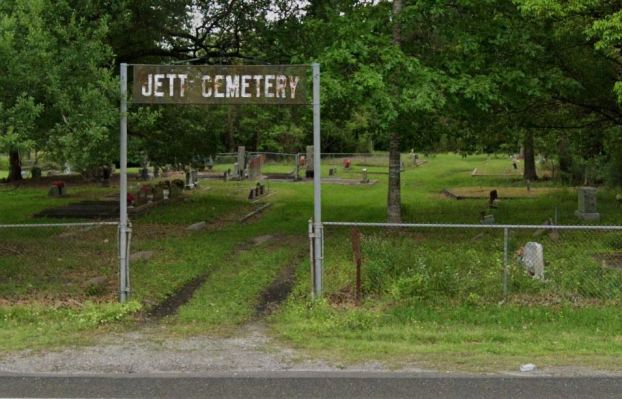 And Now You Know: Massacre of the Jett Family in 1874

The August 24, 1952 issue of the Orange Leader was published as a Centennial Edition. One of the writers in the edition was the late Ralph Ramos. Ramos had a career as a newspaper reporter and television reporter/news anchor in Southeast Texas.

Ramos has taken an interest in the history of the East Texas region and had started interviewing persons living in the Big Thicket region as well as Southeast Texas.

In 1974, his book Rockin’ Texas Cradle was published by the Enterprise Press. The book was a collection of interviews and pictures Ramos had collected over two or more decades.

Two of his early interviews were published in the centennial edition of the Leader. They gave information about two families from the history of Orange.

One of the recollections came from Mrs. Eugenia Peveto. She had married Jesse Peveto on September 1, 1887.

The couple had lived in Beaumont until John had an unhappy experience with his job and Eugenia said she “wanted to go home.” They then moved back to Orange.

When Ramos interviewed Eugenia, she had a vivid recollection of an event that occurred when she was only a young teenager; the murder of her aunt and two cousins in their home three miles west of Orange on Adams Bayou.

Her recollection was a bit like the script of an Orson Wells film noir…….  “On a night filled with rain, thunder, and lightning,” was the way she started her story.

Out of this storm, she said, “A dapper young man walked out of the storm and pounded on the door of the Ochiltree hotel.”

Lillie and Ollie Ochiltree opened the door and welcomed the wet young stranger into the parlor of their home and let him warm himself by the fireplace.

Eugenia remarked that the sisters had told her how well dressed the young man was.

The sisters began to feel a sense of danger when the man kept talking about John Jett and asked where the Jett family lived.

The next morning, he began to talk about the Jett family again and again asked for directions to the Jett home.

Lillie told him that the night of rain had flooded Adams Bayou and he would have to swim to get to the Jett home. The man replied that he was determined to find the Jetts and he was going.

“My cousin that survived said that when the man went to their home, he started mumbling about killing people. She grabbed a 10-month-old baby and ran outside. She wanted to take the baby and run for help, but her mother said no. John Jett was away from home in the woods cutting logs. Mary Jane was only 14 years old; she gave the baby to her mother and then ran three miles across the wet prairie to the home of John Lyons. She told Lyons there was a crazy man at her house that said he was going to kill everyone,” said Eugenia.

Lyons rounded up neighbors and armed with pistols, rifles, shotguns, and even a pitchfork or two, they headed to the Jett home.

Evidently, after she left, the man took an armload of firewood into the Jett home and built up the fire in the fireplace.

As they arrived at the Jett home, Lyons burst through the door and saw the man dragging the bodies of Mrs. Jett and the two children to the fireplace.

The crazed man dropped the bodies and grabbed Lyons. He backed out of the house holding Lyons as a hostage. In the yard, Lyons fought free and the man ran into the woods.

A posse formed and the man was found, captured, and taken to the county jail in Orange.

Eugenia said she remembered clearly what happened later as she lived only a block from the jail.

“I woke to the sound of a man hollering at the top of his voice,” said Eugenia.

She related that the community’s men had broken into the jail, dragged the man out and “shot him to pieces.”

The reason for the man’s actions were discovered.

Before she had married John Jett, Mrs. Jett had lived on the riverfront in the old Hanna home which had been next to the Thompson home at the end of Division Street.

The malicious stranger had been a riverman who had taken a liking Mrs. Jett in her young years.

He felt he had been jilted, and over the years, built up anger, and came back to Orange to extract revenge.

The following divorces were reported by the office of Vickie Edgerly, Orange County District Clerk, for the week of Aug.... read more