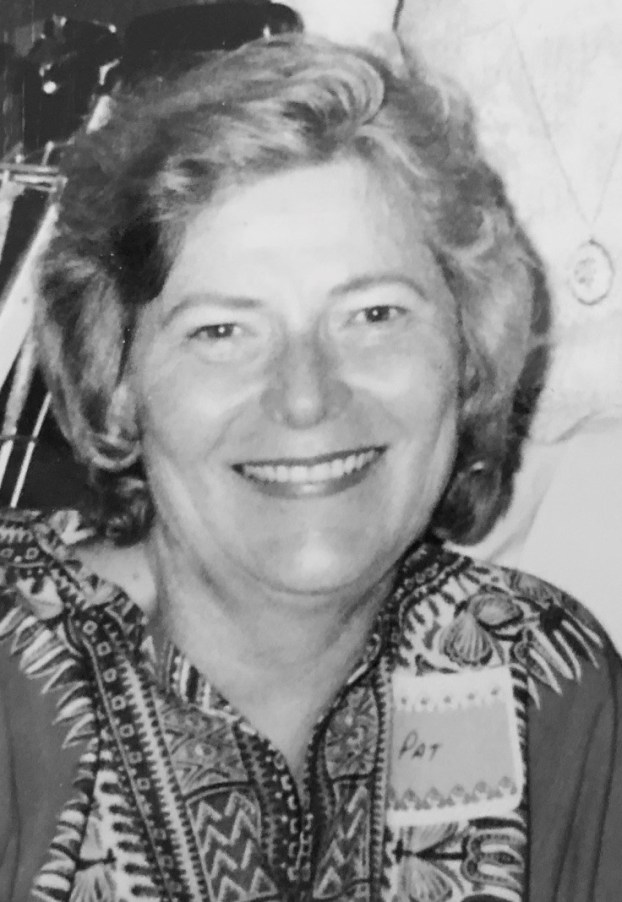 Pat was a very down-to-earth Texas woman and she was, simultaneously, a trail-blazer. She broke ground in the Presbyterian church and elsewhere, without ever drawing attention to the magnitude of what she, herself, was doing. She lived her life exhibiting her amazing mind, her keen eyes and ears, her good sense of humor, significant humility, and her deeply felt faith, which drove her endlessly to seek fairness and justice for all.

Pat was born in 1939 in Bay City, Texas to Herbert (‘Mac’) and Margaret McClurg.  Her sister, Susan, was born five years later.  During Pat’s early years, her family moved many times in East Texas and Louisiana – to wherever her father’s work in the oil fields took the family.  When she was in second grade, they settled in Orange, Texas, remaining there until Pat graduated from high school, after which oil work took Mac, Margaret, and Susan to Venezuela.

In her Texas growing up years, Pat made a very deep, lasting friendship with Betty Em Wall – who was wheelchair-bound from polio.  Pat bonded with her and became a part of Betty Em’s family. In later years, Pat wrote that Betty Em opened Pat’s eyes and ears to the diversity of humanity in ways that deeply impacted her own evolution as a person and her career.

Though church was not a part of Pat’s family’s life in her early years, through close friendships in her youth, Pat found a sense of belonging in the church.   In her teens, she became a leader among the youth at church and experienced what she wrote about as a “watershed moment” in her life in 1956 when her church – which was white at that time – shared worship with an African American church and a Native American church; this shared worship was controversial in the community and the Ku Klux Klan threw bricks through the window during the service to convey their extreme disapproval.  Pat wrote of experiencing a deep awakening at this moment and of wanting things to be different; from that day and throughout her adult life, Pat clearly put significant effort into striving to make things different.

Pat also served in the National Council of Churches, between 1982 and 1991, and was unanimously voted to serve as its President from 1988-1989 – the first clergywoman to ever serve in this capacity; she was noted for this in the New York Times.  She served on the World Council of Churches and also worked in leadership roles for Synod of Red River, Presbytery of Elizabeth, and New Castle Presbytery.

Pat fought against racial injustice throughout the world in so many ways.  Recognizing Pat’s endless commitment in this arena, Coretta Scott King had Pat serve on the Martin Luther King Federal Holiday Commission for more than six years, had her say a closing prayer at this Commission’s regular meetings, and had her serve as one of the emcees at the 25th Anniversary of the March on Washington in D.C.   In the latter event, Pat spoke and also shared the stage with many notables including Jesse Jackson. She wrote that her most significant contributions to this event were drawing Jesse’s attention to a young lad who was shouting “Jesse! Jesse!” which resulted in his responding 1:1 to the boy and her sharing her much-needed candy bars at the end of a full, rich, hot, and exhausting event with Whoopi Goldberg.

Pat led the Presbyterian church and the National Council of Churches for many years in fighting against apartheid.   In these efforts, Pat was arrested for protesting against apartheid outside the South African embassy in Washington D.C., spoke on the steps of Congress at a press conference with Ted Kennedy, and travelled repeatedly to Africa in an unending effort to seek change.  Ultimately when Nelson Mandela was released from prison and came to the US for his first visit, he included her in a small gathering of folks to whom he wanted to extend personal gratitude for their efforts to make things better for blacks in Africa.

While applying her mind and effort at righting wrongs throughout her life, Pat also very much enjoyed doing hands-on work around her home, tending to her beloved kitties, and taking long walks on the beaches in North Carolina.  She also maintained a very playful side – giving toys as Christmas gifts to the young and to the old – and wearing a Mickey Mouse watch to her high-level professional jobs.

Pat became a central member in the families of Margie and Walter Johnson and Arline and Randy Taylor – living out both the ordinary and extraordinary times with multiple generations in these families.  She will be enormously missed by the Johnson and Taylor families.

She is preceded in death by her parents Margaret and Herbert (Mac), and is survived and will be missed also by her sister Susan, brother-in-law Bruce, her nephew Alex, and her niece Christine.

A memorial service will be held 9/21 at 11am at Montreat Presbyterian Church, in Upper Anderson Auditorium.

Memorial donations are welcomed to Montreat Presbyterian Church, Austin Presbyterian Theological Seminary, The Humane Society or any non-profits whose mission is in line with Pat’s endless endeavors for justice and fairness.

Arrangements are in the care of Harwood Home for Funerals. www.harwoodhomeforfunerals.com