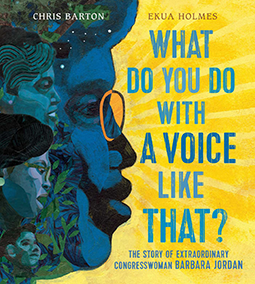 What Do You Do with a Voice Like That? The Story of Extraordinary Congresswoman Barbara Jordan named Texas Great Read for 2019

AUSTIN, Texas – The Texas Center for the Book at the Texas State Library and Archives Commission has chosen What Do You Do with a Voice Like That? The Story of Extraordinary Congresswoman Barbara Jordan by Chris Barton, illustrated by Ekua Holmes, as the Texas Great Read for 2019. Every year, the Library of Congress asks each state Center for the Book to select a title that represents the state’s literary landscape to highlight at the National Book Festival.

Texas Center for the Book invites Texans to read What Do You Do with a Voice Like That? and to take part in a statewide book club by using the hashtag #TXGreatRead on social media. For more information on the 2019 Texas Great Read program, visit www.tsl.texas.gov/greatreadtexas.

Barton’s book, appropriate for ages 4 and up, was published by Beach Lane Books/Simon & Schuster in 2018. It is the winner of the 2019 Texas Institute of Letters Award for Best Children’s Picture Book and the 2018 Barbara Jordan Book Award from the Texas Governor’s Committee on People with Disabilities, among other honors.

Throughout her life, Barbara Jordan’s bold voice made her stand out and took her to many places few African Americans had been. This engaging and inspiring picture book biography takes you into the world of the inimitable educator, writer and politician from her childhood in Houston’s Fifth Ward to the halls of power in the United States Congress. Chris Barton’s biography, along with Ekua Holmes’ vivid illustrations, invites the reader on this journey alongside Jordan—illuminating how she succeeded in giving voice to the voiceless in her lifelong fight for civil rights and equality. This uniquely Texan story continues to inspire people to fight for justice around the world today.

Chris Barton is the author of many picture books, including the bestseller Shark vs. Train, Sibert Honor-winning The Day-Glo Brothers, and Texas Bluebonnet Award Master List books The Amazing Age of John Roy Lynch (2016-17) and Whoosh!: Lonnie Johnson’s Super-Soaking Stream of Inventions (2017-18). His other books include Book or Bell? and Dazzle Ships: World War I and the Art of Confusion. He visits schools by the score and also loves speaking to professional gatherings of librarians, educators, and fellow writers. He won the 2018 Writers’ League of Texas Award for What Do You Do with a Voice Like That? Chris and his wife, novelist Jennifer Ziegler, live in Austin, Texas, with their family.

Ekua Holmes is a fine artist whose work explores themes of family, relationships, hope, and faith. The first children’s book she illustrated is Carole Boston Weatherford’s Voice of Freedom: Fannie Lou Hamer, which was a Caldecott Honor Book and a Robert F. Sibert Honor Book and for which she also won the John Steptoe New Talent Illustrator Award. Ekua recently won the 2019 Coretta Scott King Book Illustrator Award. She lives in Boston.

Established in 1987, the Center for the Book seeks to stimulate public interest in books, reading, literacy, and libraries. The Center builds partnerships with library professionals, educators, authors, publishers and booksellers who provide support to our shared mission of promoting a love of literature throughout the Lone Star State. The Texas Center for the Book is under the direction of the Texas State Library and Archives Commission at the Lorenzo De Zavala State Archives and Library Building in Austin, Texas.

HOPE FOR TODAY What’s Happening with My Adult Kids?

by Clint Decker  Clay Center, Kansas –“Pastor Miller, thanks for coming over on short notice.  My wife and I appreciate... read more