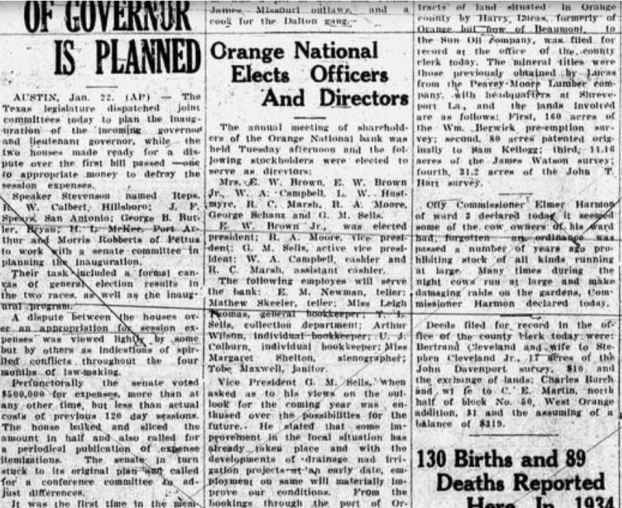 And Now You Know: Elmer Newman, seven decades as an Orange banker

As incredible as it may seem, Elmer Newman had a 74-year relationship with Orange National Bank.

In 1921, when he was a student at Orange High School and attending First Methodist Church, he was offered a job at Orange National Bank by Archie Campbell and George Sells. The two men knew him from church and knew he needed a job.

He was hired as a “runner”.

The runner carried checks between the two banks where they cleared each day. Runners also carried mail to the post office and cashed money orders that the bank took in at the post office.

Hired when he was 16 years old, Newman wore knee pants the first four weeks at the bank. At the end of his second pay period, Campbell called him into the office and told him that he had drawn two paychecks and it was time to buy long pants to wear at work.

After working six months as a runner, a job in the bookkeeping department opened up and Newman was promoted to bookkeeper.

The job required him to work standing up to make entries in the machine used to post accounts. He said it made for some long days.

Four years later, he became a teller and worked at this position for 18 years.

While he was a teller, he met Helen Hearne, whose father was a doctor in the sawmills. Helen had graduated from the University of Texas and was teaching school. She and Newman married in January 1935.

The “War Years” were very busy at the bank. The shipyards paid on Thursday afternoon. The bank closed at 2 p.m., thousands of people wanted their checks cashed. On Thursday evening at 5 p.m. he would reopen his window and wait for the commercial customers who had cashed checks for the shipyard workers to come in.

Weingartens, the large grocery store was the largest commercial customer.

Some businesses and some local people would take thousands of dollars and go to the gates at the shipyards and cash checks for the workers, for a fee.

Two officers from the ship would go to the bank to count the money.

“It took a long time for them to count the money. They were not used to counting money and had a hard time counting the new bills,” said Newman.

“During the war years, it was hard to find young men to work at the bank. They either wanted to work at the shipyards for more money or they went into the service. A banker from New York told us we needed to do like his bank had done and start hiring women to fill our vacancies. We started hiring women and it worked out very well,” said Newman.

R.C. Marsh, a cashier at the bank died unexpectedly and Newman was promoted out of his teller position into the cashier position held by Marsh.

He joined the board of directors in 1947 and later served as Chairman of the Board. He remained with the bank through 1995 as an Advisor-Director.

He was awarded a 50-year award by the Texas Bankers Association.

In his tenure at the bank, he served under 16 different presidents as well as undergoing the change from Orange National Bank to OrangeBank.

Thrift and Gift to host Community Garage Sale in September

From staff reports   In lieu of First Saturday Sale, Thrift and Gift is planning a Community Garage Sale from... read more