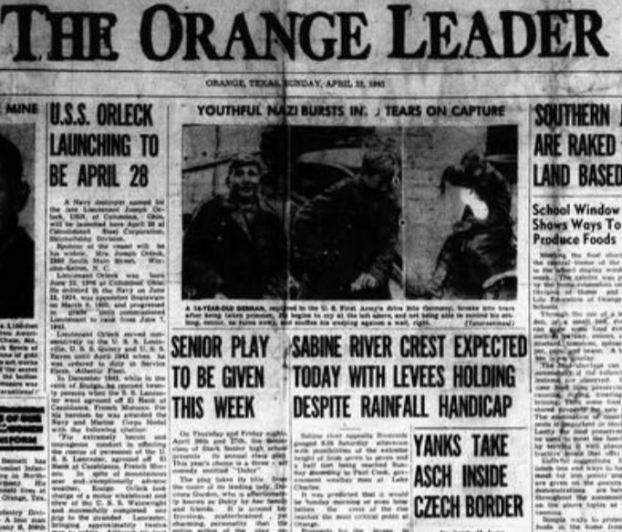 And Now You Know: The Riverside Flood of April 1945

The dam built at Toledo Bend on the Sabine River impounds water flowing downstream from Longview, where the river begins. The dam was not built for flood control, so there are periodic floods below the dam downstream to Orange due to release of water to control the impoundment level. Before the dam was built there were floods all the way down the Sabine River.

In April 1945, there was a flood in Orange caused by the heavy rainfall in the region north of Orange and partly by the drainage system in Riverside.

Riverside was the largest residential project undertaken in the United States. It was a project to provide housing for thousands of people flooding into Orange to work at the shipyards doing shipbuilding for the U.S. Navy. The work was considered “the war effort.”

The section on the east side of Orange for Riverside was selected for the housing project because it was in easy walking distance of the Consolidated and Levingston shipyards.

It was also swamp land.

To get enough land to build houses, sand was dredged from the river and allowed to settle. Nothing could be buried underground so the water and sewer lines were laid on one layer of sand and covered by another layer of sand.

The second layer was the one the houses and streets would be built on.

All of the streets drained from a high point on the west side of the housing complex to the river on the east side. After any amount of rain, the streets filled with water.

In April 1945, the heavy rainfall above Orange caused Orange to receive a little over three inches of rain. The streets in Riverside filled, the river was rising, and Riverside began to flood.

A levee eight-feet tall had been built to protect Orange from the rising river. The levee did not help Riverside. The levee was between Riverside and the river; it partially restricted drainage from Riverside.

Yards in Riverside began to fill with water. There was fear that the water would rise into the homes.

Four hundred and fifty volunteers were on standby to fill sandbags and stack them on the levee if the river continued to rise.

Pumps were brought into Riverside to pump out the water, but the water was rising at such a rate that the pumps were not able to keep up.

Rumors started that the levee had broken, and people began to wade out of Riverside and go to the bus and railroad station to attempt to leave Orange. Only a few were actually able to leave.

Most of the people in Riverside stayed in their homes and trusted the levee to hold.

A Flood Committee had been formed. They were trying to stop rumors and keep up morale.

Company D, 43rd Infantry, Texas State Guard, and other groups from the Port Arthur unit were in Orange on standby to help.

A medical and a service detachment had also been mobilized from the Port Arthur company was also in Orange on standby.

A number of high school boys spent six-hour shifts patrolling the levee checking on its status and the rise of the river. The boys were soaked to the skin from spending so many hours in the rain.

Red Cross units from Orange and the surrounding area were on standby with supplies.

Late Friday night, or early Saturday morning, the river crested at Ruliff at 17.45 feet. Ruliff is 18 miles in a direct line or 40 miles by river above Orange.

Early Sunday morning, the river crested at Orange and the danger to Riverside and parts of Orange was over. There was minimal damage to property.

Since the available pumps in Orange had not been able to keep up with the rising water, five large pumps were brought in from Lake Charles to pump water out of Riverside.

By Monday, Riverside was back to normal and beginning to dry out.

The following divorces were reported by the office of Vickie Edgerly, Orange County District Clerk, for the week of July... read more