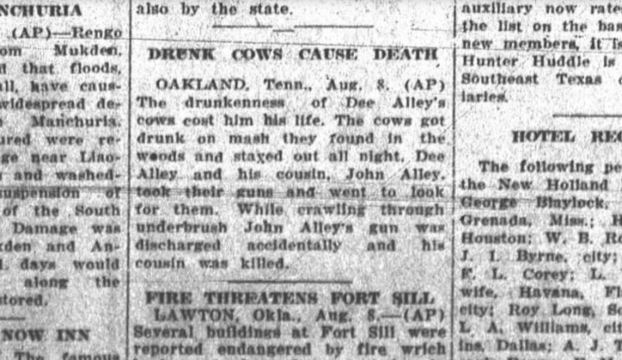 And Now You Know: During the 1st week of August 1929 was busy

News in Orange, 90 years ago, was a potpourri of news.

The first page of the Leader was news from national to local. It was a time when articles were written about a variety of subjects. News in those days covered everything from major disasters to citizens illnesses, all mixed on the front page.

The five-room home of Mr. and Mrs. Frank Wallace along with most of its contents was destroyed when the oil stove exploded. Mrs. Wallace and some of her neighbors were only able to save a few furnishings. The Orange city fire department sent one of its chemical trucks to combat the blaze.

Mr. Wallace was not home at the time of the fire. This was the second fire loss for the Wallace family in two years.

George Raborn, manager of the Orange-Cameron Land Company was in New Orleans to attend a meeting of the Southern Fur Producers Association of which he was president.

Jake Peterson, a local transfer man, received a message from his brother J.W. Peterson of Hennepin, Illinois, that J.W.’s son, William, aged about 30, died from injuries received when he was run over by a tractor in a wheat field.

“Uncle Bob” Arrington, the oldest truck farmer in Orange expects his corn crop to yield 50 bushels per acre this year. He is approaching his 78th birthday and lives alone on his farm at Tulane, about six miles west of Orange. In addition to corn, he raises hogs, cows, horses, and chickens.

“I have been farming all my life, but I don’t think I have seen better crops growing in Orange County than those growing this year,” “Uncle Bob stated.

The majority of Orange County schools have their rural schoolteachers ready to begin the 1929-30 school year on Monday, September 3, according to Miss Allie Bland, county school superintendent.

Mrs. J.W. Thigpen, secretary of the local unit of the Women’s Auxiliary of the American Legion, led the unit in securing nine new members in a campaign to recruit new members prior to the state convention to be held in Port Arthur August 26, 27, & 28.

Mrs. Hunter Huddle of Orange is the chairman of the Southeast District of Auxiliaries.

Rainfall this week was greatly appreciated by the local farmers and stockmen. Motorists were not so appreciative since the unpaved, mostly dirt roadways of the county became slippery and hard to travel by automobile.

The editorial in the Leader this week discussed speeding busses. It said that bus operators were being “conspicuous examples to the public of the danger of speed on our highways. This new mode of transportation is said to be a public convenience and necessity, but it poses a new menace to public transportation.”

A “disastrous” wreck involving a bus had recently occurred near Orange, it resulted in the death of two people and injuries to several more.

“Whether excessive speed contributed to the accident is a question that should be fully investigated by the proper authorities.”

The writer stated the operation of busses at a high speed was frequently observed on the highways.

The Gulf Refining Company sent out information that road maps for Texas and surrounding states were available at all Gulf service stations. They would be given free to anyone who asked for one state or all states available.

On the front page was a news report from Oakland, Tennessee, dated August 8:

“The drunkenness of Dee Alley’s cows cost him his life. The cows got drunk on (moonshine) mash they found in the woods and stayed out all night. Dee Alley and his cousin, John Alley, took their guns and went out to look for them. While crawling through the underbrush, John Alley’s gun accidentally discharged, and Dee Alley was killed.”