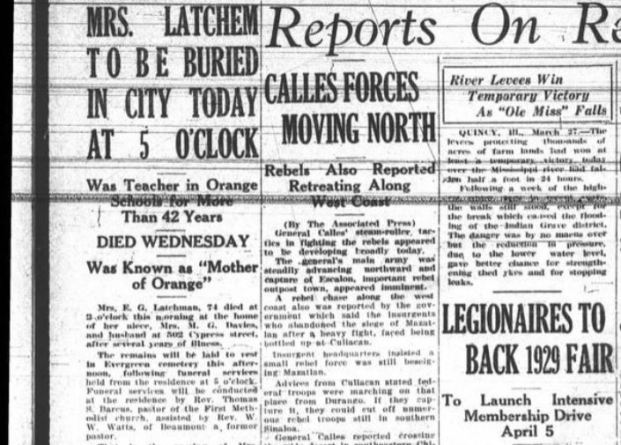 And Now You Know: Mrs. Emma George Latchman, “The Mother of Orange”

Orange, in 1929, had only about half the population of today. It was a small town with a handful of wealthy citizens.

The town had only one industry, timber. There were sawmills and shingle mills.

The men who worked in the mills were mostly unskilled labor.

However, they were men who valued education for their children. In Orange, schoolteachers were respected and were important members of the community. In March 1929, the most respected teacher in Orange died.

The Orange Leader reported: “In the passing of Mrs. Latchman one of the most beloved characters that ever lived in Orange has been removed and her memory will remain for many generations to come. This is the verdict of those who knew her best.

As a “cripple on crutches” caused by a maimed lower limb Mrs. Latchman started her career 56 years ago and for 42 years taught continuously in city schools. Fourteen years ago, she was forced to give up teaching as a result of having sustained a permanent injury that physically disqualified her from service.”

During her 42 year career, she taught four generations of pupils. Mrs. Latchman could say, “Your great grandmother was one of my pupils.”

Pupils taught by Mrs. Latchman never seemed to forget her, they could be found worldwide. In her declining days, she enjoyed letters from former pupils who “lavished praise on her” for the part they had played in helping them to start life right. “It was declared that the cheering words spoken by former pupils had been the greatest nutrient in prolonging her life to the ripe old age of 74.”

On the day of her funeral, out of respect for Orange’s oldest and most beloved teacher, all the schools in Orange closed at noon so that everyone would be able to attend her funeral.

As an illustration of how well-loved and remembered she was is the story of how on a visit to Los Angeles, California she was walking down a sidewalk paralleling one of the major thoroughfares, she saw a streetcar pause in the middle of the block amid heavy traffic. The streetcar stopped and the conductor jumped off and ran toward her. “Isn’t this Mrs. Latchman who taught me in school in Orange many years ago?” inquired the conductor who had blocked traffic to visit with her.

Others had taken large parts in her birthday celebrations and graciously bestowed gifts on the woman often referred to as “The Mother of Orange.”

“Last year (1928) friends included in her gifts a beautiful string of beads. She requested that they be placed on her neck and that they remain after she breathed her last.” Her request was granted.

“No one has meant more to church life in Orange than Mrs. Latchman during her 57 years of residence in Orange.”

“Emma George Latchman was born in Quitman, Texas and moved to Orange at the age of 15 with her parents. A year later she started her career as a schoolteacher, of which she became one of the most memorable in the history of local education.”

Four ways to protect yourself from deadly superbugs