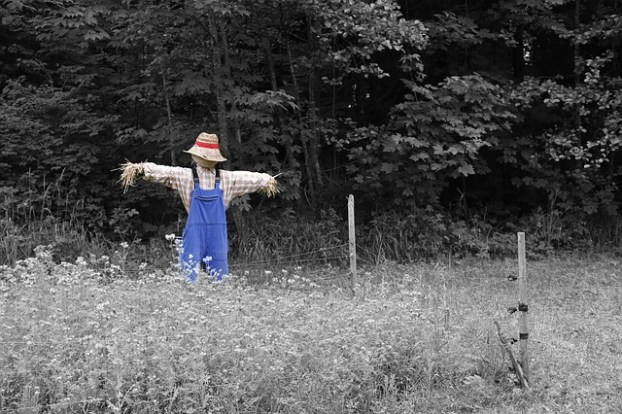 Image by Screamenteagle from Pixabay

Scarecrows – what happened to them?

I am visiting my son and his family in the Corn Belt of Indiana surrounded by cornfields and not once do I see a scarecrow.

I remember growing up seeing farms with homemade scarecrows and seeing pictures of scarecrows in books and of course, everyone remembers the Scarecrow from The Wizard of Oz, then you have those scary ones in the sci-fi movies. So, my question, what happened to using scarecrows? So, this week, I am going to get off the subject of plants and delve into scarecrows.

Where did scarecrows come from?

Looking back in history, scarecrows have been around for 3,000 years or more. The Egyptians used a form of them to protect their crops from flocks of quail along the Nile River.

Actually, they used wooden frames and netting to cover the crops and capture the quail in the nets then having them for dinner, Yum!

The Greeks were the real first ones to use wooden statues of some type to ward off birds away from their vineyards ensuring a good harvest around 2,500 years ago. They would add a club and sickle in the hands and paint them, as tho it was human.

The Japanese scarecrows were called Kakashi. It was made of old dirty rags, bells and other noisemakers and sometimes lit on fire to scare the birds and animals away from the rice fields.

Sometime later they started making them in the form of people using raincoats and hats with weaponry to make them look angry.

During the Middle Ages, small children worked in the fields running around scaring the birds away by clapping blocks of wood together.

As the Medieval Period went past with the decrease in population due to the plague, there were not many children to spare so farmers started using old clothes stuffed with straw placing gourds on top as the head. These lifelike guardians did a good job keeping the birds away.

Scarecrows in the Americas –

Native Americans have been found to use some form of scarecrows in Virginia and the Carolinas before the white man arrived.

Adult men would sit on raised platforms and shout at the birds or ground animals and came near the crops.

Scarecrows also came with the immigrant settlers, such as the Germans to Pennsylvania. They called theirs bootzamon or bogeyman.

I guess that is where we get the term bogeyman.

Sometimes a female counterpart was added at the other end of the field.

Scarecrows remained a part of the farmers’ tools until after World War II when they realized they could accomplish more by spraying their crops with pesticides like DDT. But this stopped in the 1960’s when it was discovered it was bad for us.

So, as to where are the scarecrows? Well, they aren’t in the fields anymore, but come fall, you will find them in many yard decorations, especially in rural counties.

I remember driving thru New England a number of years ago viewing the fall colors of the leaves and there were so many beautiful yard decorations up there and most all had at least one scarecrow in it along with many flowers and pumpkins.

Now, you know the history of the scarecrow.

I hope this little sidetrack from our regular weekly article you found as interesting as I did researching it.

Our monthly meetings are held every 2nd Thursday of the month at the Orange County EXPO at 11475 FM 1442 in Orangefield starting at 6 p.m. with a pot luck dinner/social and 6:30 p.m. is our business meeting. Most meetings we do have a speaker on a horticultural subject of some kind.

The public is welcome to come and there is no charge.

Savvy Senior: Men get osteoporosis too

JIm Miller, Savvy Senior Dear Savvy Senior, Can men get osteoporosis or is it primarily a problem for women? When... read more