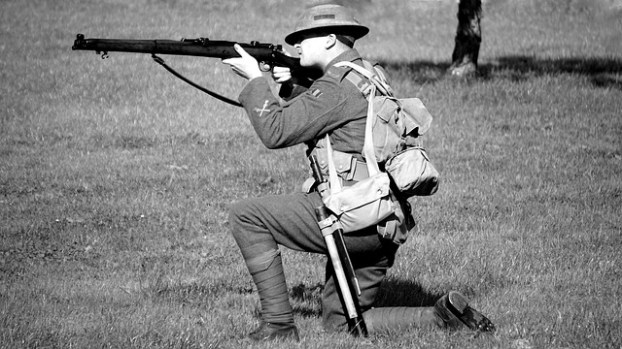 And Now You Know: From Orange to the Argonne

When war was declared against Germany in April 1917, the United States had only a small ill-equipped army.

The first action was to nationalize the National Guard troops. This amounted to 345,000 men who needed to be trained and ready to meet the professional German Army in the shortest amount of time possible.

A number of young men from Orange who were members of the National Guard suddenly found themselves drafted into the regular army. They were mobilized and sent to Camp Bowie, near Fort Worth, Texas.

Camp Bowie would become one of the largest training camps in the United States, but at the time the Orange troops arrived there it was only partially constructed.

Most of the men from Orange would be assigned to the 141st and 142nd Infantry Regiments that would, along with the 132nd Machine Gun Battalion would comprise the 71st Brigade of the 36th Infantry Division.

The 36th Division was comprised of troops from the Texas and Oklahoma National Guard units.

The troops received some very basic training in regular army maneuvers and trench warfare, received equipment and clothing as they slowly became available, had to assist with the construction of the camp and, by July 1918, they were deemed ready to go overseas.

The next movements were to take them to the large port of embarkation in New Jersey and board them on the troopship Finland for the voyage to France.

The thing that stayed with the men, long after the war, was that they were constantly seasick and that the food was terrible.

Some of them existed mostly on coffee and water. They landed in Brest, France and went by rail in boxcars called “40 and 8s”; they could carry either 40 men or eight horses. They were to be further trained in the Bur-sur-Aube area.

General John J. Pershing, commander of the American Expeditionary Forces, was adamant that American troops would only fight under the direct command of American officers. This caused friction between Pershing, the English and French generals who believed the Americans to be untrained and unable to fight.

The First American Army was created on August 19, 1918, and assigned the following September to be part of the French Fourth Army under the command of French General Henri Gourard.

They would become part of the Muse-Argonne Offensive.

In the distance, the boys from Orange could see clouds of smoke, airplanes skimming the horizon, probably the first time some of them had seen an airplane, and barrage balloons. Soon the noise of the artillery shells became a reality as the American and German lines were less than 100 yards apart. At 5:15 a.m. on October 1, 1918, the attack started.

Combat was very heavy. In two days, October 8 and 9 the 71st brigade suffered 1600 causalities, 1300 of these on the 8th alone. The Germans had amassed massive amounts of firepower in the Blanc Mont area; they were well entrenched and seasoned troops.

In one instance. American artillery fire that was supposed to land among the German troops went over them and left them virtually untouched when the attack started. The 71st Brigade faced machine guns that had supposed to have been wiped out by the artillery.

They faced such heavy opposition that in the period of time they were supposed to have taken seven miles, they were only able to advance 700 yards. They ran out of water and the best that could be done for them was to find some canned tomatoes and drink the liquid off those.

The fierce attacks by the 71st Brigade and the rest of the 36th Division and their ability to take all that the Germans could throw at them with led to the Germans finally retreating out of the Blanc Mont front.

The 71st Brigade was given a short period of rest when the October 14 attack on Forest Farm started. They were held in reserve and on October 27, the 141st Regiment moved into place on the front. After three days of combat October 27 to the 29th, the 141st Regiment along with the rest of the Division was taken out of combat.

The 36th Division was sent to Tonnerre, on the Paris highway. They were assigned to do a little road building and general labor work with the rebuilding process in the area. They did have recreation areas and General Pershing saw that all of the troops got at least a short period of leave in Paris.

The Orange troops assigned to the 141st and 142nd Regiments were on different ships. The trip home was through calmer waters and there was less seasickness.

At New York, the 141st had boarded the troopship Yale, due to sail for Galveston. A case of smallpox was discovered and the troops had to be quarantined for 17 days, the sent by train to Camp Travis, near San Antonio.

The men from Orange who were sent to Camp Travis were discharged and sent home with five cents per mile travel allowance from their home or place of enlistment, plus a $60 bonus. They were allowed to keep their uniforms, shoes, overcoat, steel helmet and gas mask.

For men from Orange who had spent their lives in Orange, their wartime experiences had to be somewhat of a wonder.

For the most part, they had only seen wooden ships on the Sabine River. They went to New Jersey and boarded steel ships, larger than perhaps they could imagine.

They arrived in France seasick, nearly to the man, and were faced with a different culture than they had ever known. For the men in the 141st and 142nd Brigades, they fought for their lives for nearly a whole month of constant combat conditions.

Shortage of water was nearly a constant condition and the majority of the food was canned beef or corned beef.  For the first time in their lives, they saw airplanes and saw those airplanes fight to the death in some cases.

On their journey back to Orange, they may have had more money than they had ever had in one time in their lives.

Arriving back home, they picked up the life they had left behind to go from Orange to the Argonne and became fathers, grandfathers, and saw other young men go to other wars.

November 11 was first designated Armistice Day in remembrance of the date the armistice of World War I was signed. After World War II, it was renamed Veterans Day to be the day that we honor all veterans of all branches of service to America.