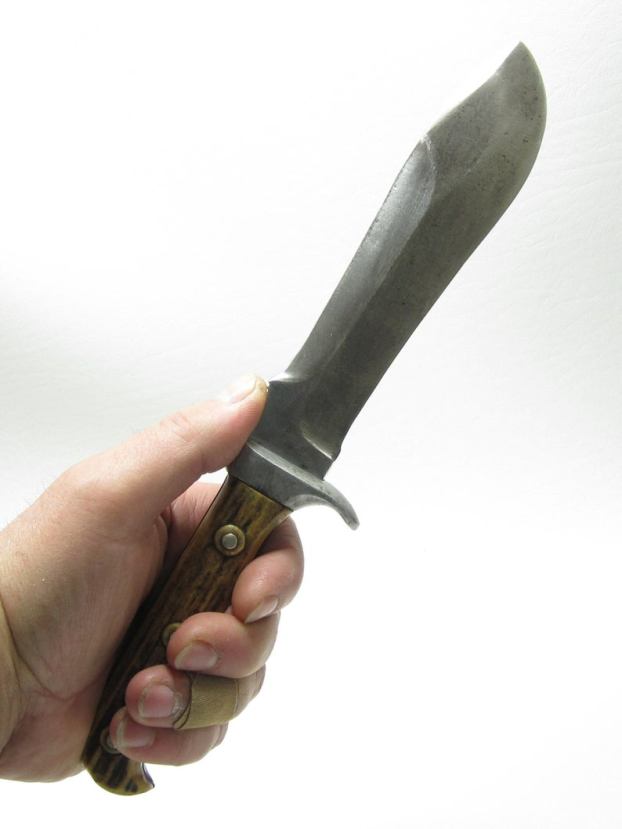 And Now You Know: Puma White Hunter, best knife ever made?

The first time I saw the Puma White Hunter fixed blade knife in an ad in Field and Stream Magazine. I became entranced, I wanted one, I could think of a thousand reasons to have one. I think the character, Ralphie, in the movie, “A Christmas Story” conniving every way under the sun to get Santa Clause to bring him a Daisy Red Ryder BB gun was actually based on me, I do not know how the movie writer knew about me, but he caught me to a “T”.

I would look at the ad every month when my dad’s copy of Field and stream hit the mailbox. I lived in Orange, Texas, not East Africa and I only hunted squirrels with my grandfather, not lions and elephants, but the White Hunter was something I could not live without.

My family, however, had other ideas and I did not get a White Hunter until decades later, when I was on my own and had the money to put it on layaway at the Famous Discount Store in Marshall, Texas.

After three months of payments, I finally had my own White Hunter.

It came in a mahogany box, lined in a green felt material and had a description sheet glued to the bottom of the box to explain the things about this knife that made it so unique and useful.

In 1934, the East African Professional Hunters Association was founded in Nairobi, Kenya. The Association was disbanded in 1977 when Kenya outlawed all big game hunting.

The association was made up of hunters that took their sport very seriously. They wanted the best equipment they could find.

Most of them agreed that as important to them as knives were, quality and utility were lacking.

In 1956, several had collaborated on a design and consulted the Puma Knife Company of Solingen, Germany. After a little fine-tuning of the design, the Puma White Hunter was produced.

The knife is made from one piece of steel. Early knives were made of carbon steel, after a few years, they began to be made from a stainless steel, called Pumaster.

A round “drop point” slightly curves upward to the finger guard. The last 1 3/8 inch of the blade is finely serrated. Those two features make it an unequaled skinning knife. On the upper side, at the tip, is a finely ground point, behind the point is a diamond-shaped flat “hammerhead”, suitable for driving small tacks.

The top edge has a ground 2-inch blade heavy enough for hacking small limbs and other brush. At the end is a serrated thumb rest for giving downward pressure.

The handle is made of staghorn, there is an aluminum finger guard and a lanyard hole in the handle.

The knives are handmade. 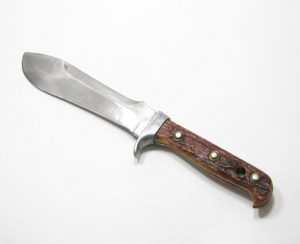 After the steel is heated, it is hot dropped forged to shape the blade, then the handwork of 22 different polishing steps takes place by the craftsman using increasingly fine lubricants, oil coolants, and special polishing grease. The staghorn handles are hand cut and individually fitted with brass rivets, which are then filed, and the handle is burnished to a precise shape and size for optimal fit and function.

I doubt there has ever been another knife of any type as well designed and functional as the White Hunter.

The uses have gone far beyond what any of those East African Professional Hunters could have imagined in 1956. The design has remained unchanged, although Puma has made different models with different handle materials, such as hard exotic woods, and a rubber handled model for fishermen.

One use that the old white hunters would not have imagined was as its use as a survival knife in wartime. The White Hunter was carried by pilots and aircrew members in Vietnam and conflicts since. It is not meant to be a fighting knife and is not good for stabbing, but to cut through aircraft aluminum, and hack through brush, to cut items needed to build a shelter, it has been proven to be effective.

The price of new White Hunters today is over $400. A used White Hunter on eBay is usually priced between $200 and $400, depending on condition.

My White Hunter is not for sale at any price.

It was made before 1964 because there is no number on the finger guard. These numbers were added later and give the quarter and year the knife was made.

My knife is scratched up and the leather sheath is nearly black from years of use and applications of leather oils to keep it supple. The leather thong intended to tie it to the leg has never been unwound.

The leather lanyard that goes through the handle has saved my knife numerous times from being lost. I have used the knife to skin deer, and squirrels, filet fish, cut fish bait for both salt and freshwater fishing and used it as a kitchen knife. The fine serrations make it a great knife to slice tomatoes.

It is banished from the kitchen at home. None of my wives would allow it since they were not sure how clean it is, they have seen me just wipe it on my pants leg and put it back in the sheath. None of my wives has been as red-necked as I am, or they would understand.

I probably own a dozen or so folding knives, but after I bought the White Hunter, I never owned another sheath knife.

My White Hunter has been like finding the perfect soul mate. I have taken a lot of ribbing when I’ve appeared on a squirrel hunt with that big knife on my belt. But the joking stops when I show them how easy it is to use.

Once fishing at Rollover Pass on the Bolivar Peninsula, a friend and I went into a café to eat lunch. There was a sign that said knives with over a 4-inch blade were not allowed. I took off my White Hunter and started outside and the owner stopped me and asked me about it, he had never seen one. When I enthusiastically showed him the features of the knife, he asked me if I was a salesman for Puma. I guess he could tell I love my knife. He told me to put it back on; he said it was not a danger to anyone unless they tried to take it away from me.

The “Ralphie” is not out of my system.

One year, I bought my own Christmas present. Hanging on my wall is a brand-new Daisy Red Ryder BB gun. You are never too old to be young.

Karen Stevens A predominant prophetic sign that we are in the “end times” is the re-establishment of Israel, and Jerusalem... read more