And Now You Know: Before the Strand, there was the Strand 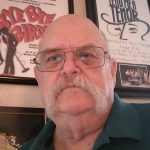 The Statler Brothers recorded a song about a Strand movie theater. In the song, an adult reminisces about being young and going to the movies at the Strand. He would get caught up in the cowboy shows and yell that his hero was being ambushed by the bad guy. He relates several good memories of going to movies at the Strand, and then sadly tells that the town had to expand, so the Strand was torn down and the location is now a parking lot.

Almost anyone who was raised in Orange in the late 1940s, 50s, and early 60s can relate to that. The location of the Strand was on Front Street where “Short Sixth” met it. Now it is a parking lot.

The Strand so many Orangites knew opened on May 13, 1942. The owners, the Jefferson Amusement Company, proudly announced that it was the first fully air-conditioned theater in Orange. The announcement in the Orange Leader stated, “No expense has been spared in this department (air conditioning) and patrons of the new theater will be assured of maximum comfort both in summer and winter.”

The projection and sound equipment were touted as being state of the art, the best that could be provided. There were lounges for both men and women. The owners had decided that with the rapid wartime growth in Orange that there needed to be the finest entertainment venue available. The Strand had seating for 1,040 movie patrons.

The article also stated: “A few weeks ago, the old Strand, a movie landmark was razed to make way for the most modern and beautiful theatre in Southeast Texas.”

It may surprise some to find that there was a Strand before the one so many Orangites “grew up” in.

The first Strand opened in 1924. Among its furnishings was a Wurlitzer Theatre Organ, Opus 849, style, 135 Special. The organ was installed on June 25, 1924. The organ was necessary for the background music for the silent films of the era. The old Strand was built in the days of silent films and made the transition to “talkies.”

There was another theatre long gone and poorly remembered. It was the Starland Theatre. It was a one screen theatre with 570 seats. It was built after the first Strand and closed sometime between 1943 and 1950.

The Bengal Theatre opened about 1940. It was located at 209 Fifth Street; the operators were Paramount Pictures through a subsidiary, Julius Gordon. The Bengal had 558 seats and was open until the mid-1950s.

Practically across the street from the Bengal was the Gem Theatre, at 212A Fifth Street. The Gem was slightly smaller than the Bengal with 446 seats and operated by the same owners as the Bengal.

Another theatre in Orange operated by the Paramount/Gordon partnership was the Royal at 510A West Front Street. It was single screened, as were all the others. Its seating capacity was 560. The Royal outlasted both the Bengal and the Gem, closing in the late 1950 decade. 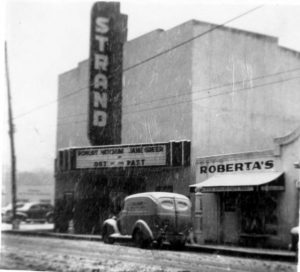 The Strand at its height

The Dragon Theatre at 1112 Second Street was the smallest of the Orange Theatres, only seating 350. The last owner of the Dragon, Charles Rosenthal, kept the projection room fully equipped, clean and ready to show movies until the final decision was made to raze the building many years after it ceased to show movies.

On August 18, 1950, the Jefferson Amusement Company added a new venue to the Orange theatre scene when they opened the MacArthur Drive-In. It catered to the love of cars and movies. There was semi-circular parking for 600 cars to view the large screen. At the time, it was built there was nothing but woods across from and behind the theatre. Now there is a hospital across Strickland Drive and the Roselawn housing addition behind the theatre site.

The newest fad in theatres had a landscape painting on the rear of the screen, the view that patrons got as they drove up to buy a ticket to enter. There were living accommodations for the theatre manager in an apartment located beneath the screen.

Some residents of Roselawn had movies with no sound as the view from their houses. One of the games of the day was to use the large car trunks of the day to sneak in non-paying movie fans.

The parking lot for the Lutcher Theatre takes up the space where the “New Strand” and the Bengal once stood. The parking lot for the Orange Public Library occupies the space once occupied by the Gem and the Royal. There is a vacant lot on Second Street where once the Dragon showed its movies. The screen and parking area of the MacArthur Drive-In is now the site on Home Depot.

The last movie theatre in Orange these days looks like a cracker box on concrete. It has none of the characters of the old theatres, and where the “New Strand” was proud to announce that the entrance was street level and there were no longer steps to climb to enter the theater, the Showbiz Cinema, with its two screens has steps to climb. It originally opened in 1974, operated by Foothills Entertainment, Inc. The building has been sold to the Orange Community Players for their new theater.

In addition to losing the theatres, the local Jefferson Amusement Company that operated the theatres in Orange, Beaumont, and Port Arthur no longer exists, having been sold off to several corporate owners, like Showbiz Cinemas.

The old theatres are gone, but there are many memories of the Saturday “Kiddie Shows”, first-run movies, first dates, and probably first kisses in the old theatres.

Local to run in Wienerschnitzel Wiener Nationals in July

In a race to benefit the Seal Beach Animal Care Center, Kristi Hinds and Murphy will participate in the 24th... read more