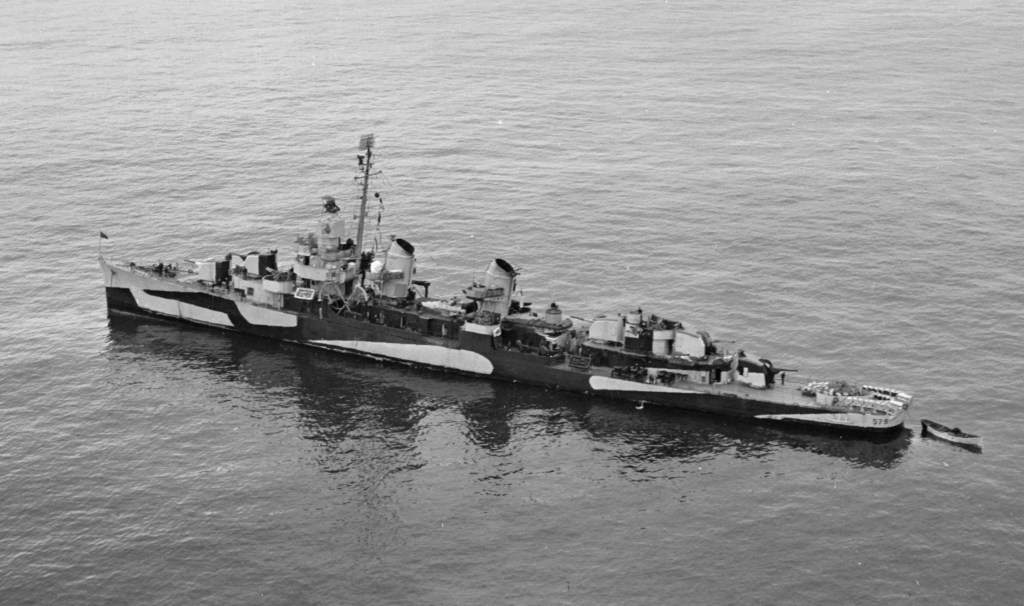 The USS William D. Porter was the 11th of the first destroyers built in Orange for service in World War II.

The Porter was launched on September 27, 1942, and commissioned on July 6, 1943. No one at that time knew what a “unique” service record she would have.

The Porter was sent from Orange to Galveston, then to Guantanamo, Cuba for her shakedown cruise. She then went to Charleston to begin her active service.

On November 12, 1943, she left Charleston to rendezvous at Norfolk with the battleship Iowa to become part of the fleet that was carrying President Franklin D. Roosevelt to the conferences at Cairo and Tehran.

When departing Norfolk her anchor was not completely raised and secured. This resulted in tearing the railing and lifeboat mounts off a sister ship when the Porter maneuvered astern to leave port.

As the fleet entered rough water, a depth charge rolled off the deck of the Porter and exploded causing the fleet to think they were under attack from an enemy submarine.

On November 14, the president requested a drill to show how the escort ships would conduct a torpedo attack. The Porter and the other ships began the drill with a simulated attack on the Iowa. The drill went awry when a torpedo accidentally launched from the number two torpedo tube on the Porter and headed toward the Iowa.

The Porter attempted to notify the Iowa but due to radio silence signal lamps had to be used. The signal misidentified the direction of the torpedo and in addition, relayed a wrong message that said the Porter was backing up rather than a torpedo was in the water.

Desperately the Porter broke radio silence and used code words to warn the Iowa of the incoming torpedo. The Iowa confirmed the identity of the Porter and made a hard turn to avoid the torpedo.

Roosevelt learned of the incident and had his Secret Service man move his wheelchair to the side of the ship so that he could see the action.

The torpedo missed the Iowa and detonated in the ship’s wake about 3,000 yards astern of the ship. The Iowa was not damaged, the incident only lasted about four minutes.

The Porter and her crew were ordered to Bermuda for an inquiry. President Roosevelt intervened in the inquiry and stated the incident was an accident and no further action was taken against the Porter.

The ship then went to Norfolk to prepare to be sent to the Pacific Theater. She went to Alaska and saw service there before going to Leyte in the Philippines.

Arriving at Leyte after the invasion, she only saw limited action.

Her next assignment was to take part in the Lingayen Gulf invasion where she served as a fire support ship.

The invasion of Okinawa began on April 1, 1945. The Porter was assigned to Task Force 54 as a fire support ship for the invading forces. She also provided anti-submarine and anti-aircraft defense for the larger ships and protection for the minesweepers. 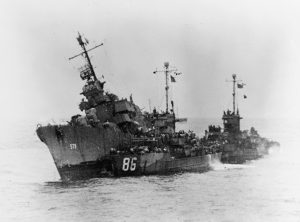 On July 10, 1945, an obsolete Japanese Aichi D3A “Val” dive bomber dropped out of the clouds. It was a Kamikaze headed straight for the Porter.

The Porter took evasive action and the plane missed the ship. The trajectory of the plane carried it under the Porter as it sank. The plane, loaded with explosives, exploded directly under the Porter. The resultant explosion was strong enough to lift the ship into the air. As she settled back down into the water, there was a loss of power, broken steam lines and several fires.

The crew tried to fight the fires and repair damage for three hours. Finally, the abandon ship order had to be given. Twelve minutes after the order was given the ship rolled to the starboard and sank. There was no loss of life.

Of the 39 destroyers built in Orange, the Porter was the only one lost in combat. She was awarded four battle stars and was struck from the Navy Register on July 11, 1945.