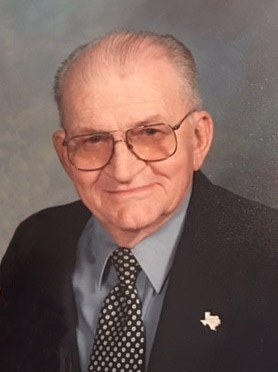 Albert Dana Gore, “Al” of Bridge City, TX, passed away at his home on Monday, December 18, 2017.  He was a long time resident of Bridge City and served the community as an educator and civic leader.

As a respected civic leader, in 1973, he was elected chairman of the Charter Commission for the purpose of forming a new charter for Bridge City. This led to the incorporation of “The City of Bridge City”. He was a member of the Bridge City Rotary Club, and was named a Paul Harris Fellow by the Rotary Foundation of Rotary International. In 1971, he was recognized by the Bridge City Chamber of Commerce as “Outstanding Citizen of the Year”.

He was the eldest son of Earl Crockett and Maude Cole Gore.  He was raised in Kirbyville, TX and attended public schools there.  He later graduated from Sam Houston State Teachers College with Bachelor of Science and Masters of Education degrees. He also served his country in the United States Army as a guided missile fire control crewman.

He was a member of First Baptist Church in Bridge City, and following his retirement, he and his wife, Patricia, traveled and helped with building projects with the Volunteer Christian Builders.

Visitation will be held prior to the service beginning at 1:00 p.m.