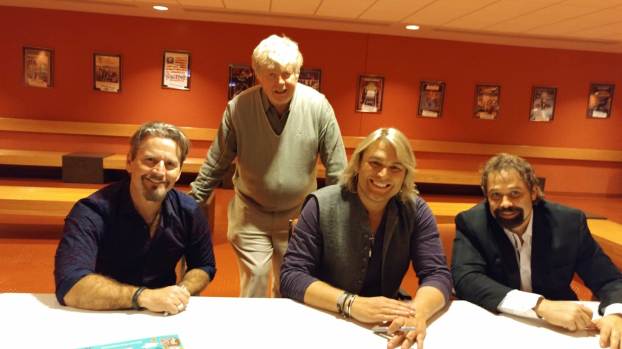 The three Texas Tenors sang from their hearts to a sold-out crowd at the Lutcher Theater Sat., Dec. 16, and received a standing ovation.

David Payne, of Orange, asked for autographs for a children’s book authored by The Texas Tenors, one of four finalists at the 2009 America’s Got Talent on ABC Television Network.  The book is called Ruckus on the Ranch, with an accompanying CD.

JC Fisher, originally of Kansas but currently calls Katy, Texas, home where he lives with his 3 children and wife, a former Miss Kansas 1998; Marcus Collins, a stage and screen actor from Iowa and Houston; and John Hagen, also originally of Iowa, known for his opera singing and music teaching, along with his gallery in Cedar Rapids, Iowa.

All three men have lived in Texas and perform at least 150 or more concerts per year.  They also often perform in Branson, Missouri.

Fisher calls himself the Romantic Tenor, Collins is known as the Contemporary Tenor, while Hagen simply goes by The Tenor.

The Texas Tenors will return to Texas on April 29 for a performance in College Station,

and they will conduct a concert on June 1 in Fort Worth.

VIDEO: Collecting toys for over 2,000 children

By Eric Williams The Orange Leader In the months following the devastation of Harvey, The Ochs Family Toys for Tots Campaign... read more