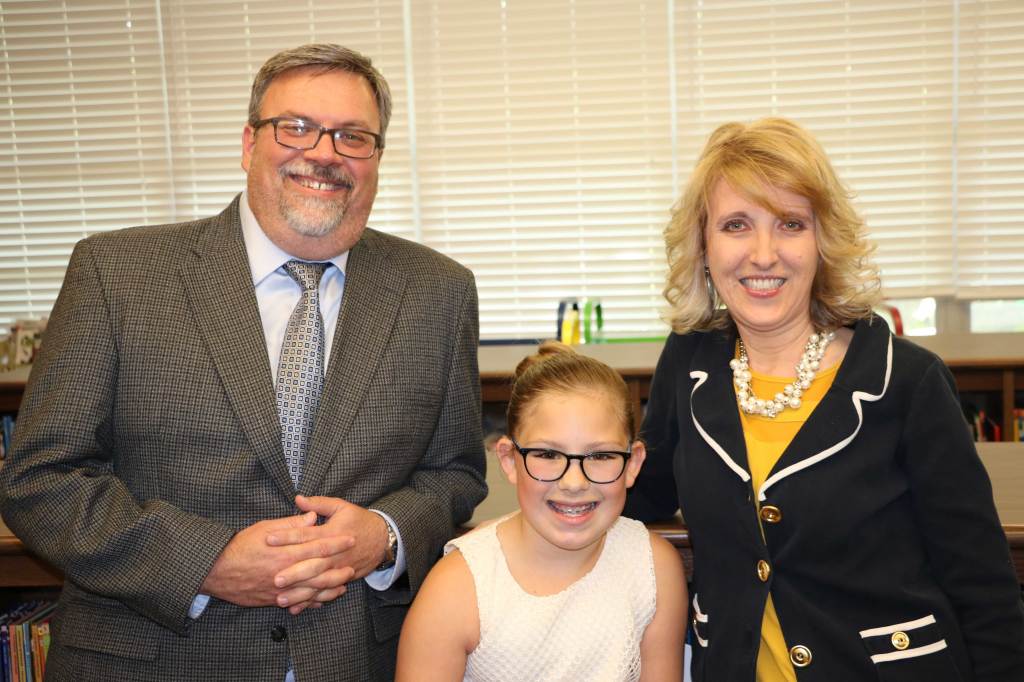 Pine Forest teacher Darla Marino definitely was not expecting a win. But win she did, and big time.  The Reaud Excellence in Education Award is given to local educators from the Beaum0nt Foundation, who award a $10,000 cash prize to each recipient.

As excited as Marino is to have the money to help fund her daughter’s college education, she is more honored by the nomination letters that were submitted in her packet by Pine Forest Principal Preston Clark.  ​Brett Nunez, who was a student in Mrs. Marino’s Kindergarten lab twelve years ago, says, “She made learning fun for each and every one of us. She would have us doing numbers or sounds down the hall from our classroom to hers.  Every time I go back to my elementary school I love to see her. She is still that super sweet teacher that all the kids love.  I even have memories of my little brother being mad that he could not go to Mrs. Marino’s class during his Kindergarten year!  I thought I was so special to be one of the kids that got to go to her room.”  He continues,” She is just one of those teachers that make kids feel like they can achieve any and everything they want.”

Parent Tara Holder said what an honor it was to be asked to write a letter to recommend Marino.  “She taught my son in a class designed for children needing additional assistance from their regular classes.  He had her from Kindergarten through third grade for extra math assistance. However, she taught my son so much more than math. At a young age he didn’t care for math, but after Mrs. Marino spent quality time with him, it’s now his favorite subject.  He says she was the kind of teacher who had patience and kindness.”  Ms. Holder goes on to say that “She treats each student with their own uniqueness in mind, knowing that they may each need to be taught in a different way.  She was not only a great teacher, but a mentor and added support he needed at that time of his life. She made efforts to come to his baseball games, which taught my son the value of dedication in all of life and not just a piece of it.  He still respects her for everything she has done for him over the years.”

Fellow teacher Misty Roche says, “Darla Marino is a phenomenal educator who positively influences the lives of her colleagues, parents, and her precious students.  Many of the students in intervention struggle with behavioral issues, have difficulty concentrating, and are economically disadvantaged.  She is so kind, patient, caring, and compassionate towards each and every one of them.  She strives to build self-confidence, which results in success.”

Yet another co-worker, Kindergarten teacher Heather Clayton, says, “Darla Marino IS that champion for our students at Pine Forest Elementary.  She truly believe that every child can learn and she is always willing to do whatever it takes to make her students successful.  She works tirelessly to make sure that her classroom is an environment where her students are engaged in their learning and they feel loved and nurtured.”

Marino and her fellow honorees attended a reception and gala on Tuesday, May 2 at Lamar University’s John Gray Library.  She has served on the Title I Advisory Committee, the District Site-Base Committee, and several campus decision-making committees, as well as the District Special Programs Committee.  In 2000-2001 she was named Pine Forest Elementary Teacher of the Year.  She has volunteered with the United Christian Care Center, Heartbeats of Hope, the Humane Society of Southeast Texas, First Baptist Church, and the Kairos Soup Kitchen.

This award-winning teacher says that the most fulfillment she has ever received is when a child comes to her and says, “Mrs. Marino, I finally understand!”  She says, “I have come to embrace the words of Ignacio Estrada,’If a child can’t learn the way we teach, maybe we should teach the way they learn.'”