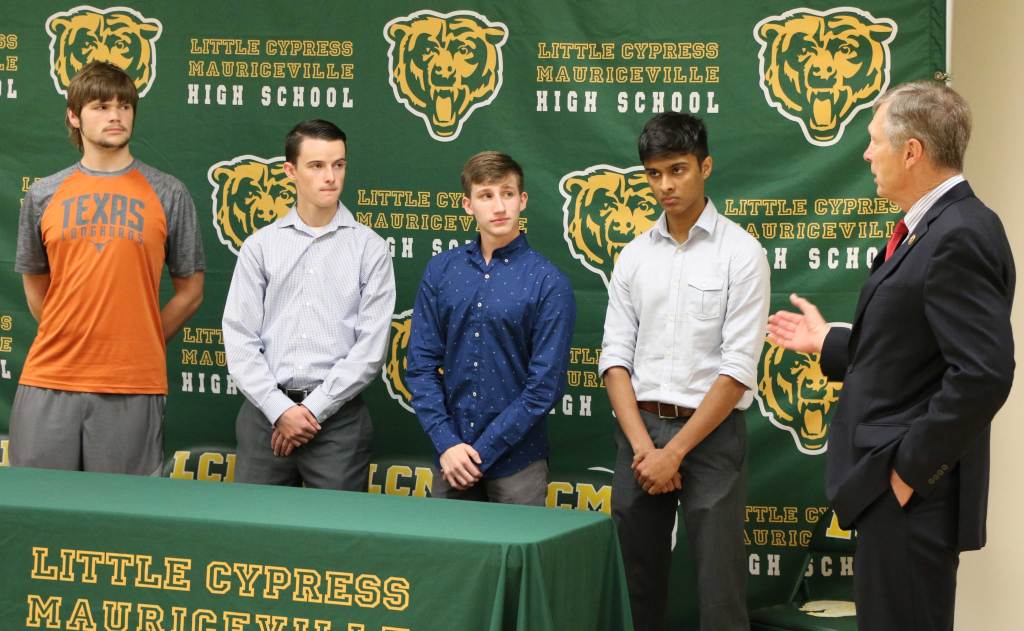 On Wednesday, April 19, Representative Brian Babin of the US Congress, visited Little Cypress-Mauriceville High School to congratulate Trey (Ronald) Guillory, who has been appointed to the Air Force Academy and Mack Patterson, an Orangefield senior who has won a West Point appointment.

Babin, who nominated both young men, spoke highly of their commitment, involvement, and work ethic and encouraged them to be their best as they begin the next stage of their education.

Congressman Babin’s other meeting at LCMHS was to visit the team he nominated to participate in the “Capitol Hill Challenge” (CHC). This program matches members of Congress with students, teachers, and schools competing in The Stock Market Game™ (SMG) in their respective district or state. Student teams manage a hypothetical $100,000 online portfolio and invest in real stocks, bonds, and mutual funds. Bernard Perricone, who teaches government and economics at LCMHS is the coach of team members Matthew Cox, Dalan Jones, Chris Cook and Amaan Chakkiwala.

Congressman Babin discussed their investments, what they have learned from the experience and talked about how the U.S economy is affected by politics and other countries.

When asked about their expectations for the Challenge, Matthew Cox said that given the amount of money they started out with, he expected the profit to be much greater than what it actually is. Dalan Jones explained that in addition to the $100,000, they also had $50,000 extra that they can buy on margin, but that is essentially a loan that must be paid back. They have a total equity of about $106,000 that has accrued since February. Mr. Perricone said that the team is currently ranked 72ndout of 3272 participating teams.

Chris Cook says that this has been a very good learning experience and that he now knows that with research and observation, you can have a fairly good idea of how the market will perform. Amaan was surprised that short investments of new product releases that they thought would take off have not lived up to their hype, performing below what was expected of them.