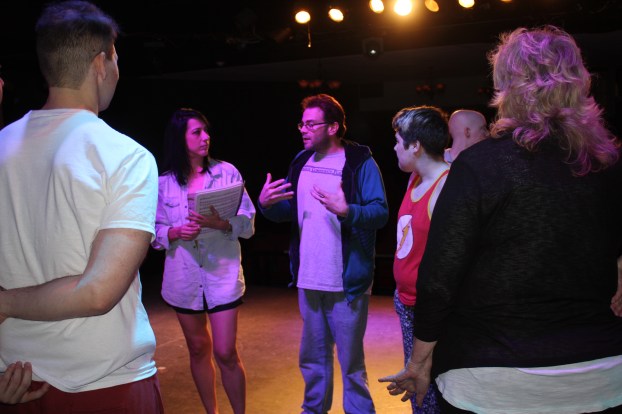 Dawn Burleigh/The Orange Leader Thomas May, center, gives directions to the cast of Guys and Dolls. The comedic performance will open at 7:37 p.m. Thursday, March 23 at Orange Community Players at 708 West Division Street in Orange. For ticket reservations call 409-882-9137.

May brings Guys and Dolls to OCP

In Guys and Dolls, New York’s most infamous crap game organizer, Nathan Detroit, hoping for a big pay day, challenges notorious gambler Sky Masterson to a bet he’s sure he’ll win: take mission girl Sarah Brown to dinner in Havana, Cuba. Sky accepts and pursues the known prude, seemingly hopelessly, while Nathan deals with his own situation – his 14-year fiancée, Adelaide, who’s tired of waiting for a wedding. When bets and love seem at odds, the characters are called to question their priorities to make things right, according to Broadway Musical official website.

Guys and Dolls is not May’s first time to step into the role as director. He also directed Bye Bye Birdie last season.

May has served on the board of Port Arthur Little Theater and now on his fifth year on OCP board.

“I have always loved Guys and Dolls,” May said when asked why he selected this play to direct. “It has a memorable score and so many sayings which we still use today such as my time of day or a bushel and a peck.”

It was after directing Bye Bye Birdie May became inspired to suggest Guys and Dolls for this season.

“Community theater needs more men,” May said. “I was blessed with this show and an extremely talented funny cast.”

May said the show also opens the opportunity, as a director, to be more ‘cartoony and silly’.

“This show is full on comedic,” May said. “It is over the top and different from Bye Bye Birdie.”

Volunteering with local theater, according to May, allows a person top see a story with new eyes.

“It’s a collaboration of the community,” May said. “It entertains and enlightens the audience while the cast is placing themselves out there for the judgment of others. As the cast works together, they see the best of others.”

The Bridge City Chamber of Commerce held a ribbon cutting ceremony to welcome Citrus Cove Apartments to its membership on March 21,... read more