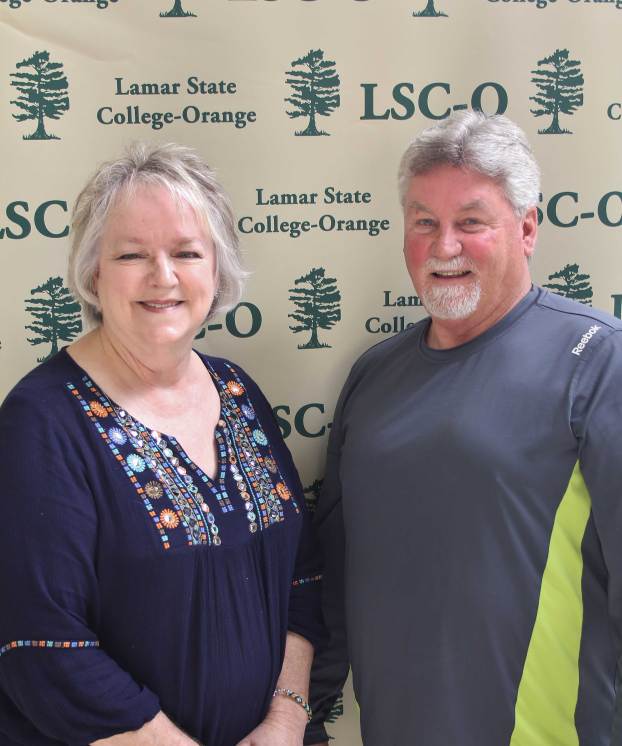 Lamar State College-Orange Home to Citizens of the Year

Recently, two employees were recognized for embracing the practice of giving back to the community. At the Greater Orange Area Chamber of Commerce banquet, Butch Campbell was honored as Citizen of the Year, while Charlotte Chiasson received the same honor at the 57th Annual Bridge City Chamber of Commerce banquet. Shahan commented, “Both Charlotte and Butch have embraced the college mission of service. They have volunteered their time to help others. I am very proud of what each of them has accomplished.”

Campbell, Director of Security and Community Liaison, has served the LSC-O campus since the mid 1970’s. Campbell began his teaching career as a physical education instructor at the fledgling campus then known as Lamar University-Orange. After 40 years of dedicated service in countless capacities, Campbell continues to be what many consider the epitome of Lamar State College – Orange’s community mission.

With his “can-do” approach and optimistic attitude, Campbell emphasizes that “The Beautiful Little Campus Downtown,” as he refers to LSC-O, offers each employee the opportunity to give back to the community. The commitment, combined with providing access to quality education, makes LSC-O a positive force in our local area. “No one has done more for our community than Butch Campbell,” Shahan said. “He is always willing to help a worthy cause. He never seeks recognition or acclaim. He simply believes in helping others.”

Campbell serves, or has served as board member and volunteer with countless organizations. A life member of the Orange Lions Club, he is past president, recipient of the Jack Wiech and Melvin Jones Award, and the 2016 recipient of the Lion of the Year Award. Campbell often serves as Master Chef for local fundraisers and banquets, including Cops and Kids, an organization which has benefited from his skills at the grill for over 18 years. He has also worked in various capacities for Orange Camp Fire, the March of Dimes Walk, Back to School Orange County, and the Orange Chamber of Commerce. He is the only two-time winner of the Julie and Ben Rogers Award for community service.

Campbell has set the bar high in consideration of the importance of family and community. The campus and the community have benefited from his service. “Mom and Dad taught me to help others and to care for every person. I think they would be proud of the foundation that they gave me,” said Campbell. “And, I sure hope I can pass this down to my kids.”

The Bridge City Citizen of the Year, Charlotte Chiasson, is Administrative Assistant for the Education and Mathematics Division at LSC-O. Her career at the campus began in 2003, but Charlotte has been very involved in the Bridge City Community for many more years. She is a former member of the Bridge City PTA, a Little League team mom, and election clerk and judge for the Bridge City ISD. Additionally, she was the charter president of the Friends of the Bridge City Public Library (1988) and has continued to serve as an officer and volunteer for the organization. Charlotte received an award from the Texas Historical Commission for her work in helping to organize the ceremony for the 50th Anniversary of the Rainbow Bridge in 1988. She then co-chaired the dedication of the Veterans Memorial Bridge in 1990 and co-chaired the rededication of the Rainbow Bridge in 1997.   Chiasson served on the Board of Directors for The American Red Cross for three years and as secretary for two years. She was also Disaster Core member. In 2003, she received an award from the Third Battalion-Second Marines-The Warpigs of Weapons Co. 3/2–for her collection of 1,200 pairs of white, cotton socks mailed to the battalion during Operation Iraqi Freedom. From 1993-2003, she was a member of Team Cities of Texas committee. Charlotte served on two bond issue committees for BCISD in 1995 and again in 2001. She also served on the Wal-Mart Scholarship Committee for five years.

Chiasson was on the City of Bridge City Beautification Committee in 1989 when it was selected as citizen of the year.   She has worked as a substitute teacher, reporter-typesetter, and cooking columnist for the “Orange Countian Newspaper. Charlotte volunteers as a Sunday school teacher, she loves to read, quilt, and travel, especially with her six sisters who plan “sister trips” at least twice a year. While serving as the executive vice president of the Bridge City Chamber of Commerce, she began to interview pillars of the community, hoping one day to write a book about local history.   She just completed writing The History of Prairie View-Bridge City and is donating the proceeds to The Friends of the Bridge City Public Library expansion project.

When asked about her recent recognition as Citizen of the Year, Chiasson stated, “I was so honored to be selected. When you honor me, you honor my family, who shared in the award. I was reminded of something a dear friend and mentor, Tom Perry, always told me: ‘You can pay someone a salary, but, you cannot pay someone to care.’ I care about my community.” Shahan said, “Charlotte Chiasson is one of those people who make Bridge City a special place.  She loves her community and readily gives her time and talent to make it better.  She represents the spirt of community service that LSC-O values.”

Lamar State College – Orange is proud of its Citizens of the Year and applauds each of them for their service to our local communities.

Special to The Leader MEMPHIS, Tenn. — Ducks Unlimited announced the winners of the 2017 Wetland Conservation Achievement Awards during... read more