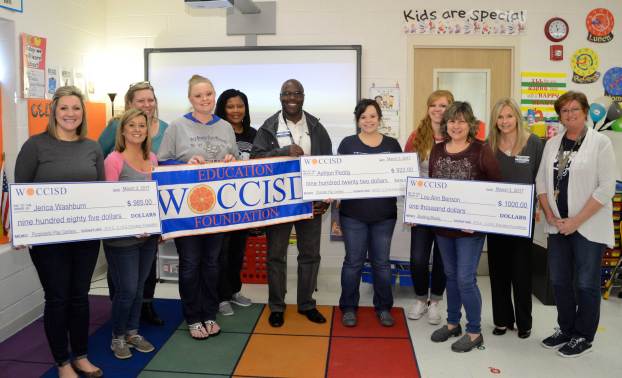 Nine grants were presented at three West Orange – Cove campuses today by the West Orange – Cove Education Foundation. This is the sixth consecutive year for the foundation to present teachers with the grant awards. Today’s grants totaled over $8700.

Since the WOCCISD Education Foundation began awarding grants in 2011, more than 50 grants in excess of $118,000 (including this year) have been awarded to classroom teachers in the WOCCISD school system.

The grant awards were made possible through the efforts of all dedicated past and present members of the Education Foundation Board of Directors and generous donors.

Dr. Lois Bready, and her brother Doug Bready were present to help award the grants. Their families established the Foundation in memory of their parents Eva and Gerald Bready. Eva Bready was a beloved and innovative teacher in the WOCCISD School District who prepared a generation of students to excel in science and to make significant contributions to their communities. Both Eva and Gerald Bready were passionate supporters of the importance of science and math education.

Today’s grants were awarded to:

At West Orange Stark Elementary School, Lou Ann Benson, Kindergarten, received a Team Grant for $1,000. This grant will provide for the purchase of a building block center which will enhance problem-solving abilities, mathematics skills, and language and literacy abilities.

Summer Hall, 3rd Grade, received a Math Team Grant for $1,000. This grant will fund the purchase of chromebooks, headphones, privacy shields, and vinyl wipe learning pockets for use in guided math small groups.

At West Orange Stark High School, Grant Gilson, Algebra, received a grant for $1,500. This grant will fund the purchase of Kindles Fire tablets to use as calculators. The tablets will also allow students to access math software, and instructional math websites to equalize student opportunities.

Meri Elen Jacobs, Journalism, received a grant for $951. The grant will fund the purchase of a document camera to teach copy editing to journalism students.

Kimberly Summers, English, received a grant for $500. The grant will fund the purchase a classroom set of novels and a field trip to The Holocaust Museum.

At West Orange Stark Middle School, Jessica Tant, Social Studies Department Grant, received a grant for $950. The grant will fund the purchase of a camera, green screen and lighting, a microphone, and tablets so that students can place themselves into a historical environment to interview famous historical figures and create news reports. It will make history come alive through small group video activities.

Mattie Brittain, Social Studies Department Grant, recieved a grant for $899.95. The grant will fund the purchase of a tablets to access interactive maps with a live knowledge base.