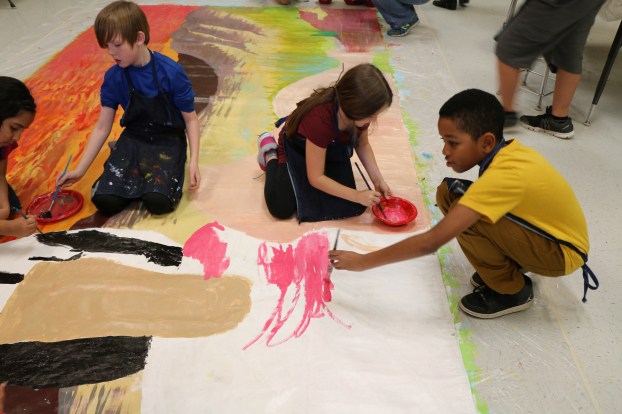 Photo courtesy of Little Cypress-Mauriceville CISD Crystal Gonzalez, Jaxson Singer, Jessica Ferguson, and Isaiah Thompson participate in creating one panel of a six-panel mural that will be hung on the fence surrounding the museum in downtown Orange when complete.

Last week, students of Marcia Perrine at Little Cypress Intermediate School, participated in creating a mural with the help of education staff from the Stark Museum of Art. The students teamed up to paint one section of a six-panel mural that will be hung on the fence surrounding the museum in downtown Orange when complete. Students from other school districts will paint additional panels of the large work.

The school did a similar mural last year in conjunction with the bug exhibit in Shangri La. This year’s masterpiece is titled “Branding the West,” and before beginning to paint, students learned about the Native Americans who lived in America’s west, about the creatures who inhabit the land, and the nature of the land itself.

Different groups of children were given responsibility for painting portions of the panel and even blended paint colors to reach the correct tint needed for their sections. The groups were shown a rendering of what the final mural will look like once all of the sections are completed.

By Dawn Burleigh The Orange Leader   Kelly Price, 97, has lived in Orange since 1945. “I taught school for... read more