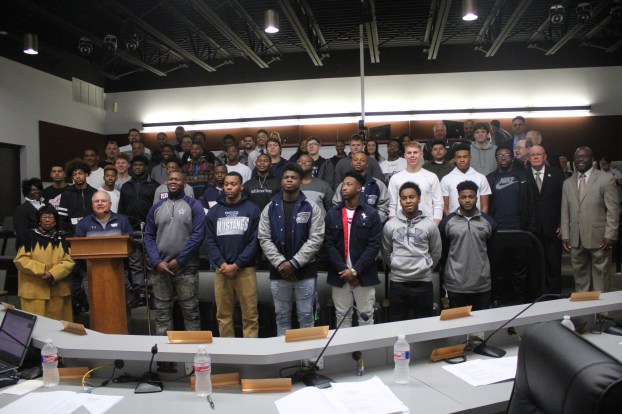 “I want to thank the mayor and these special young men,” Coach Cornel said. “Not only are they great athletes they are also great students. There are 12 honor students and several on the A/B honor roll.”

“I am amazed year in and year out,” Guidry said. “Mustangs are the classiest team. In my work with the school, I see their grades and attendance. They have the best.”

Councilman Larry Spears Jr. said the team did something no one else had been able to accomplish.

“You young men, and young women from the Fillies, Flag, and Cheerleaders, have done something,” Spears said. “It is the one time we all came together, no color, no racial division. We are all Mustangs. That is something no one else can do, but you do that.”

Building upon what the team has accomplished was the advice Councilmember Annette Pernell said.

“It is not just today, take it forward and build on it,” Pernell said. “You are only young once, don’t stop growing.”

Mayor Jimmy Sims said the team is recognized throughout Texas because of their accomplishment.

“Any school will think at the State level they may have to face West Orange –Stark,” Sims said. “You have played together since you were five years old. You have super parents, grandparents and a support system. We hope you the best for your future.”

Councilman Patrick Pullen also reminded the council of a wreck over the weekend involving WO-S students.

“Keep those students in your prayers,” Pullen said. “One of the students broke a collarbone and will have surgery. My granddaughter has a concussion. We were lucky they did make it.”

Mayor Jimmy Sims said the city does not have the authority to open or close any hospital.

“The Emergency room at the hospital, effective Thursday will be shutting down,” Sims said. “We recommend if you have a life threatening emergency to visit one of the there emergency rooms here: Neighbors, Orange County Urgent Care and Golden Triangle Emergency Center.”

Sims said the project for a hospital has been passed from the city to the county.

“We have to have medical care here,” Sims said.