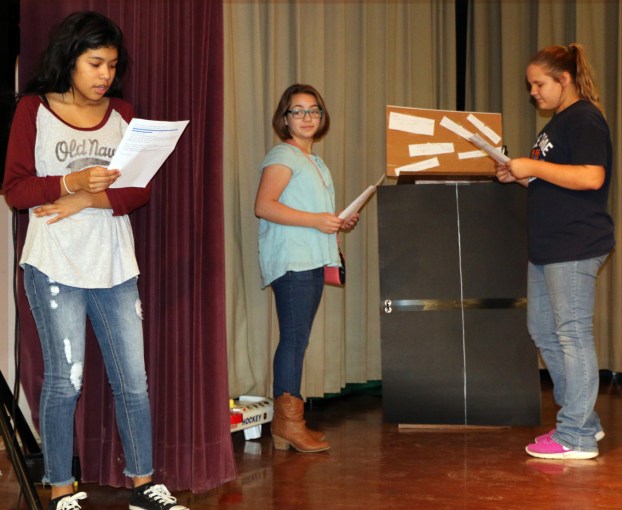 Photo courtesy of Little Cypress-Mauriceville CISD Angelica Espinoza, Reanna McKay, Bailey Manning are developing their reading skills by becoming writers by learning how to adapt literature into a play.

Students in Julie Pelt’s seventh grade honors reading class at Mauriceville Middle School are developing their reading skills by becoming writers. After reading the novel “The Westing Game” earlier this year, the class discussed the story and began learning how to adapt literature into a play. Students were assigned a chapter of the book that they had to turn into a scene of a play. In the Hollywood tradition, they were allowed to “embellish” the scene to fit their interpretation of the book.

Each scene was written in play format, complete with stage directions, use of props, and lines given for the characters in each piece. Classmates served as the actors or narrators for each and the students used the stage to mount their productions. Some students, rather than using actors to interpret their work, chose to make dioramas to describe the scene, then read their own piece, after explaining their diorama.

Special to The Leader   Lamar State College-Orange marked a milestone on Friday, December 16, at the Fall 2016 Commencement... read more