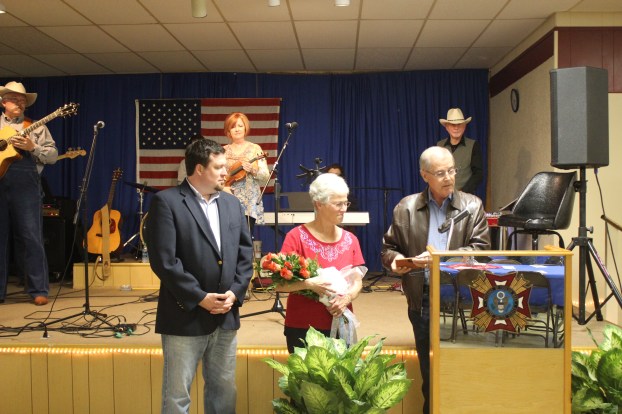 Dawn Burleigh/The Orange Leader Michael Hoke was honored on Saturday during the Denim and Diamond Gala. Robert Hoke, left, Michael’s son, and Sandra Hoke, Michael’s wife, were presented with a brick by Brown Claybar in recognition and honoring him. Michael Hoke passed away in January.

Hoke honored at Denim and Diamonds

A man Orange who was a huge part of Orange was recognized on Saturday during the Denim and Diamond Gala to benefit the orange Train Depot.

“The passing of Michael Hoke left a hole in our hearts,” Brown Claybar said. “We wanted to recognize and honor him. He was an ‘all in’ guy.”

Claybar described Hoke as a true environmentalist while teaching young persons about the earth and providing life-changing experiences.

“He saw a need to clean up Adam’s Bayou,” Claybar said. “He is the one that started what is now an annual event.”

Hoke was involved with the Friends of the Orange Depot and was one of the founding members.

“He saw what the Depot could be to future generations,” Claybar said. “He saw the vision.”

Sandra Hoke, Michael Hoke’s wife, was presented with roses and a token of a brick in his honor.

“A brick in Michael’s honor will be at the depot,” Claybar said. “This is a token of that brick that you can keep on your desk.”

As the flowers were presented to Sandra, the woman handing them to her said they were “Roses for a rose.”

Michael Hoke passed away in January 2016.

Carrie Woliver, president and founder of Friends for the Orange Depot, also announced the Stark Foundation underwrote the reception area of the Depot for $100,000.