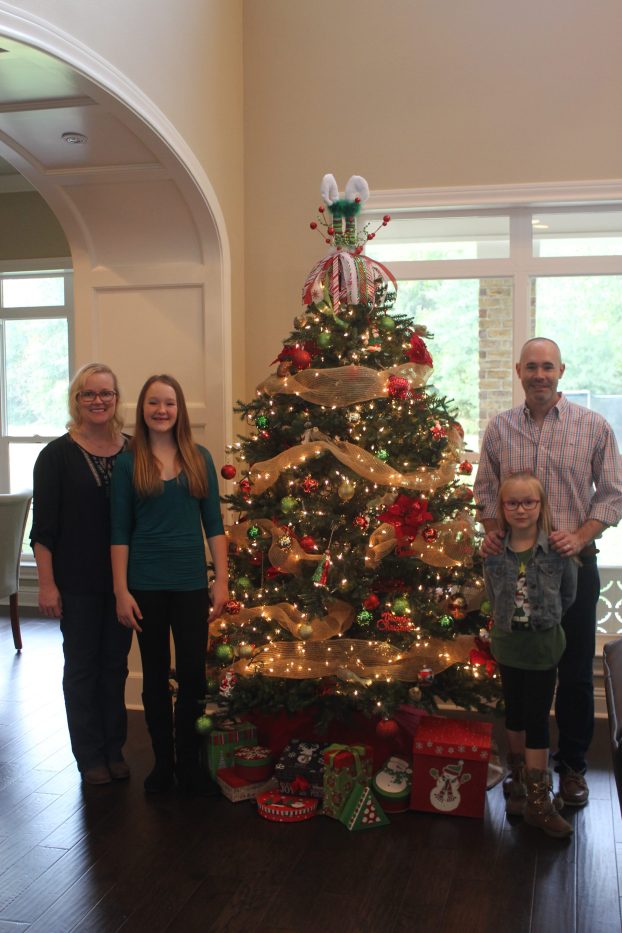 Dawn Burleigh/The Orange Leader Micca, Lily, 12, Josie, 7, and Chris Riedel stand next to a tree, which display a special ornament from the couple’s honeymoon. The 60th annual Toy Coffee hosted from 10 a.m. – 2 p.m., Thursday, December 1 at the home of Chris and Micca Riedel at 2320 South Teal Road in Orange.

Admission to the annual event for guests was a new, unwrapped toy or a monetary donation, which was given to The Salvation Army of Orange County for use in its Christmas program for less fortunate families.

Last year during the event, within the first 30 minutes of the event, the Service League of Orange and Salvation Army received $1,000 in donations.

This year, the home of Chris and Micca Riedel will host the event.

“This is the earliest we have ever had Christmas out,” Micca said. “We are really excited about this.”

“We are very honored and feel privileged to be a part of the good work it does for the children of Orange County and Salvation Army,” Chris said.

On the tree in the living room, one can spot a special ornament for the couple – the honeymoon ornament. The Christmas Martha Vineyard July 2000 ornament was the first ornament purchased as a couple and in commemoration of their honeymoon.

“It was beautiful there, just great,” Micca said.

A tree topper also holds special memories as a patient of Micca’s made it for her.

In the dining room, a display of the Classic Snowvillage features a reproduction of Ryman Auditorium, home of the Grand Ole Opry in Nashville.

Opened in 1892 as the Union Gospel Tabernacle, Ryman Auditorium was built through the efforts of steamboat shipping magnate, Thomas G. Ryman. The Victorian tabernacle had no air conditioning or dressing rooms, but the Opry fit the Ryman beautifully. The show broadcast from the venue, which came to be known as the “Mother Church of Country Music,” until March 15, 1974, according to opry.com.

“It is the first piece I bought,” Micca said. “It is also one of my favorites.”

The toys and monetary donations are provided to the Salvation Army of Orange County, which, in turn, uses these toys to help fill the Christmas wishes of hundreds of children across the area. The Toy Coffee charity event has helped supply more than 2,800 toys and approximately $24,000 in donations in the past six years.

Visiting with family during the holidays

Meanwhile With Madeleine… By Madeleine Fuselier   Hi there! I am a life-long Orangeite who is living in Paris. I... read more