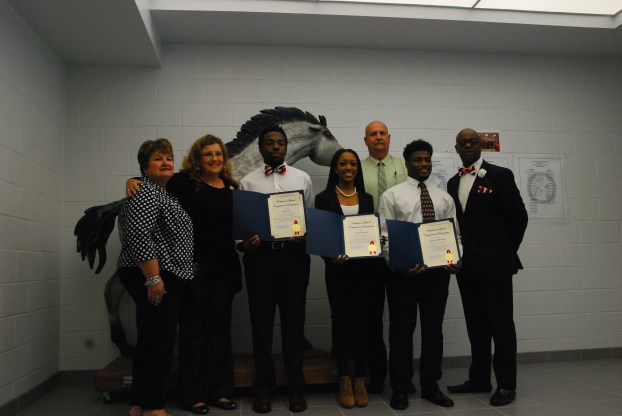 Ronald Guillary, LC-M ISD and Ivory Roberts II of Spring ISD also received certificates but were not in attendance on Wednesday.

Recognition for the students achievements began with a Washington, D.C. sponsored by the non-profit organization Young Financial Wizards, Inc. The trip also included time at the New York Stock Exchange.

“I just received word this year’s NY/DC trip has been nominated as best trip/school,” Ivory Roberts, founder of Young Financial Wizards, said. “This is the third year in a row.”

Three years ago, Roberts decided to take the students to the New York Stock Exchange as part of the trip.

“We were invited back the following year,” Roberts said. “Last May was suppose to be the last year but we made history by being there three years in a row. We have been invited back next year as a result of these students.”

Roberts is the first to take a group three years in a row on a tour of the Wall Street Stock Exchange without being a CEO for a fortune 500 company.

“I had a little knowledge of the stock exchange,” Rhodes said. “Until the security clearance, I did not know just what a big deal it was to be there. I could see the news stations set up and said to myself, ‘I can see myself there.’ I had a great time.”

Paul Ivory said going through the exchange was knowledgeable.

“Actually going there is different,” Ivory said. “I gained a lot of knowledge and learned quiet a bit of history by being there.”

Ivory Roberts said the experience of the trips is provide the opportunity for the students to place the students in a position to say ‘Yes, I can do that.’

“It is opportunities such as this which give a student an opportunity to think outside the box,” Lanie Brown, executive director of community relations for Congressman Brian Babin, said. “To be an engineer for the Navy, or work on the stock exchange is possible.”

By Paul Ivory Special to The Leader What is the true value of education? Most people would say that success... read more