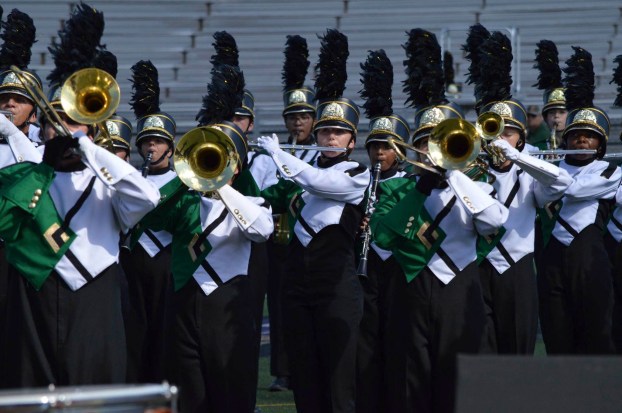 Photo courtesy LC-M Band Boosters The LC-M Marching Band qualified for the Class 4A State Marching Contest after a superb performance at Regionals.

This year Class 4A schools that qualify will make the trip.

Well, one band will be growling their way all the way to San Antonio Nov. 7.

The Little Cypress-Mauriceville Battlin’ Bear Band, which has been awesome year-in and year-out for so many years will be heading that direction as they had an amazing performance at the Area Meet at Stephen F. Austin University in Nacogdoches over the weekend.

It was quite a long day last Saturday at Area for the band members and their families and friends.

The band performed early on Saturday and had to wait for a few grueling hours to find out whether they had made the Top 10.

They were elated to make the Top 10 and had to play again Saturday night in the final round.

They then impressed the judges to make the top five to punch their ticket to the State Marching Contest.

The other four schools in the region that will advance to State includes Paris, Atlanta, Spring Hill and North Lamar.

The Bridge City Band also made it to area and advanced to the Finals Saturday night to wrap up another great year.

The LC-M Band Booster Club is taking preorders for a State Bound shirt.

Shirts are made of 100 percent cotton and will be $20 each. If you would like to place an order, email Thomas Martin at tmartin@mhcdce.com ASAP with the name, size, and quantity.

Band students need to order a shirt if they want one, as this is a fundraiser to help with trip costs. They will be handed out and payment will be made at the band hall on Friday.

I am in Vidor

Does it look like something is missing? It’s you! YOU are the ‘I’ in Vidor!  Go to the Vidor Public... read more