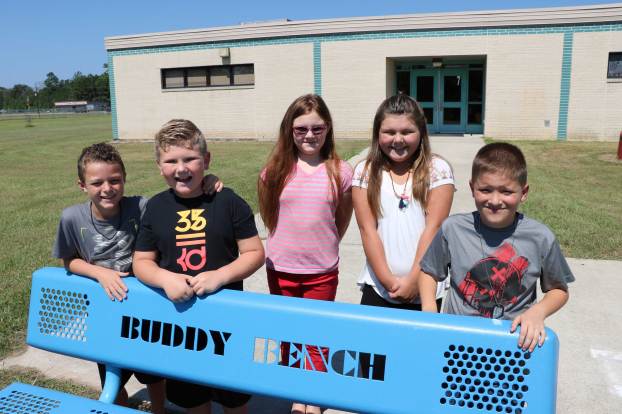 Do you remember what it felt like to be the new kid at school?  Luke Loe of Oak Forest Elementary in Vidor remembers.  It’s a scary feeling to be on a big playground with over a hundred students and not know a single one of them.  But Oak Forest staff has made that transition much easier for kids with the purchase of two ‘buddy benches.’

According to PE teacher Janet Hagler, the benches originated in Germany. The idea was actually brought to the United States by a student in Pennsylvania, and now they are in schools in towns in the United States.

The “Buddy Bench” is a simple concept with goals to create friendships on the playground.  If a student is shy, lonely, or new to the campus, he or she goes to sit on the buddy bench. Oak Forest students have quickly learned that compassion is a great thing, and they surround the child with friendship, inviting him or her to come play.  Lane Gray, a fourth grader at Oak Forest, said he befriended a boy who was sitting on the buddy bench, and is still friends with him to this day.

Hagler added another twist to the idea.  There is now a Buddy Board in her gymnasium. If students make a new friend, they go together to the Buddy Board and sign their names, linking them in yet another way with written proof that they have joined in a bond of friendship.

“Students who may be fussing with each other can also sit on the Buddy Bench,” Hagler says. “It’s a good place to take a little time away from things and work out your problems.  When students are seated away from the action and just focus on each other and settling their differences, it seems so much more simple to them.”  The two Buddy Benches at Oak Forest are painted bright turquoise and were a gift from the school Parent Teacher Organization. They are located in separate locations on the playground.

The Orange County group #2 from Leadership Southeast Texas also donated wooden buddy benches that they made.  Each elementary school in Orange County received one, according to Vidor City Manager Mike Kunst.  He said the idea originated with group member Ruth Hancock, a retired teacher who is president of the West Orange-Cove school board.  “She was very instrumental in not only suggesting this, but making it all come together.  She felt it was very important.”

Students are excited about the buddy benches and the opportunity it gives them to make new friends and show kindness to other students. Oak Forest fourth grader Gracie Stephenson says, “I saw a girl waiting on the bench one day.  I went over and asked her to play with me.  Now we are friends.”  And what could possibly be better than one true friend?

Special to The Leader AUSTIN – In conjunction with National School Bus Safety Week (Oct. 17-21), the Texas Department of... read more