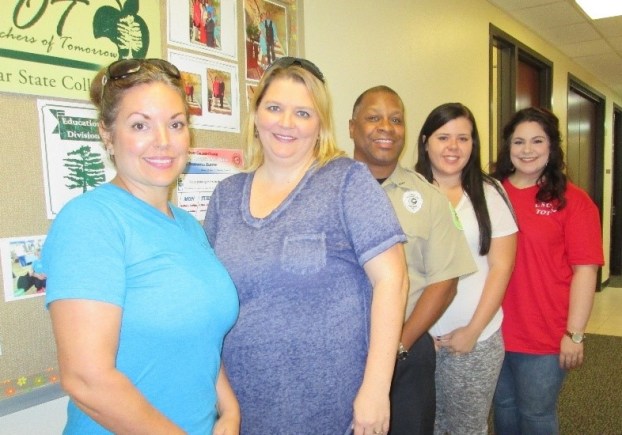 The Teachers of Tomorrow organization at Lamar State College – Orange have elected officers for the fall semester. The officers are Associate of Arts in Teaching students and will obtain their Texas teaching certification.

The president is Melanie Lee who graduated from Redbank Valley Jr./Sr. High School in 1993. She belonged to her high school’s Library Media Club serving as vice president and has held the office of vice president of the TOTs. She plans to finish her degree at Lamar University and teach kindergarten. Melanie is married to Justin Lee and they have four children, Louis Bazan, Jr., Xander Lee, Izabella Lee and Elizabeth Lee.

Molly Freed was elected vice president of the TOT group. She is a 1992 high school graduate from Little Cypress-Mauriceville High School. While in high school Molly was a member of the Vocational Industrial Club of America serving as president, district president and state vice president. Molly plans to obtain her bachelor’s degree at Lamar University and teach Jr. high science.

Jada Fairchild was elected secretary of TOTs and was a 2015 high school graduate from Deweyville High School. While in high school she was a member of the Book Club, National Honor Society, Spanish Club, FFA, and served on the yearbook staff. She plans to receive her bachelor’s degree at Lamar University and teach high school level Spanish. Jada is the daughter of Misty and David Fairchild.

Callie Choate was elected historian of the TOT group. She was a 2015 high school graduate from Little Cypress-Mauriceville High School where she participated in Health Occupations, Students of America, Honey Bear Drill Team and band. Callie has not decided if she will finish her bachelor’s degree at LU or at Stephen F. Austin University. She is the daughter of Rachel Choate and Paul Choate and the sister of Landon Choate.

Cedric Lee was elected public relations officer by the TOT group. He graduated from West Orange-Stark High School in 1983 where he was a member of the student government. Cedric will finish his bachelor’s degree at Lamar University and get his teacher certification in Jr. high art. He is the son of William and Luvear Lee and the brother of Linda, Wilma, Delphia, Cheryl and Sheila. His two sons are Erik and Sheldon.

The sponsor of the Teachers of Tomorrow organization is Dorraine Babcock.