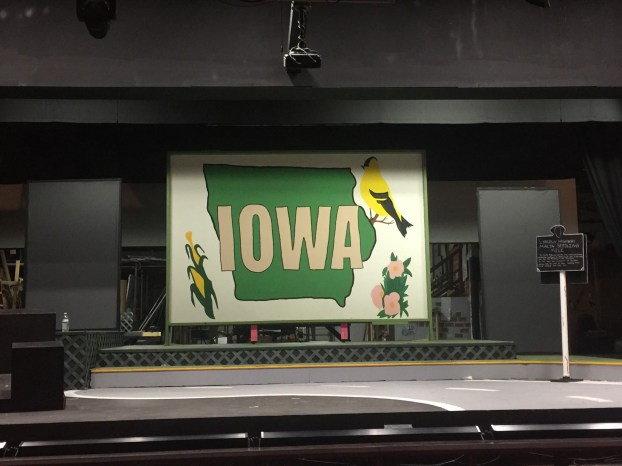 Photo courtesy of Orange Community Players "Leaving Iowa" is about family and was written lovingly by comedians Tim Clue and Spike Manton, directed by Damon Gengo. Call for reservations at 409-882-9137.

Come along on a family vacation with Orange Community Players’ latest production and bring back those warmhearted, fun, and sometimes guilty, memories. “Leaving Iowa” is about family and was written lovingly by comedians Tim Clue and Spike Manton.

The plot is sprinkled with flashbacks from the present to an indeterminate past. Talented director, Damon Gengo, says that the play has a timeless quality and you feel that the time frame is whenever your own family went on these summer road trips. The Browning family consists of a dad, mom, sister, and brother.

The crux of the plot is that dad has died three years before and they have had his ashes in the basement all this time. The son, who selfishly missed his dad’s funeral, is to take the ashes back to the grandparents’ property for burial. His journey is filled with nostalgia and hilarious people along the way.

Extremely well cast is the dad, portrayed by Bryan Buzbee. He is your “Everyone’s Dad” – nerdy, loving to visit boring places, spouting historical trivia, driving poorly, and trying to coax some interest out of his two whiny kids in the backseat. Buzbee is so believeable that you forget he is acting. Great Job!

Fighting continuously, the kids are often loud and obnoxious, constantly irritating their parents. The lead actor is Don, the guilt ridden son, who makes the journey back to the old homeplace with the ashes only to find that it has become a grocery store. His journey is not only a physical one but a mental journey whereby he learns to appreciate his father’s life more. Don is played beautifully by Dylan Kilday, an experienced and gifted actor. Kudos, Mr. Kilday!

Equally entertaining is Ciarra Kendall as the sister. She breaths life into her character; manipulative, aggravating at times, and she knows just how to play her father. Christina Gengo, as the mother, tries to keep the peace and, demonstrating immense patience, she finally erupts into a rage when the kids really get on her nerves. Good jobs!

Not to be left out are the two remaining actors, Kyree Jackson and Jana Gilchrist. They fill in the gaps and play a variety of characters in vignettes on the journeys. “Scene Stealer” is Jackson, showing off his acting chops as the friend, Jack, who drinks heavily because he is not happy with his teaching vocation. Also, he is inventive and funny as a gay guy hitting on Don in a restaurant. Gilchrist moves between her characters easily and with aplomb. The two actors portray Civil War re-enactors, an Amish Couple, an odd taciturn waiter, and a gabby waitress, to mention a few. Bravo, you two!

The set is well designed and works efficiently. Enough can’t be said about the prowess of the director, Gengo. He is an Assistant Director of Theater for Lamar State College at Port Arthur and has been involved in more than 200 productions. He has his actors very prepared and the play moves along like a well-oiled machine. His experience shows. This play is good family entertainment at its best with great costumes and visual effects.

PH PD giving back to man who has given so much

By Dawn Burleigh The Orange Leader Pinehurst Police Department, with the assistance of Project Blue, is holding a Sack Lunch... read more