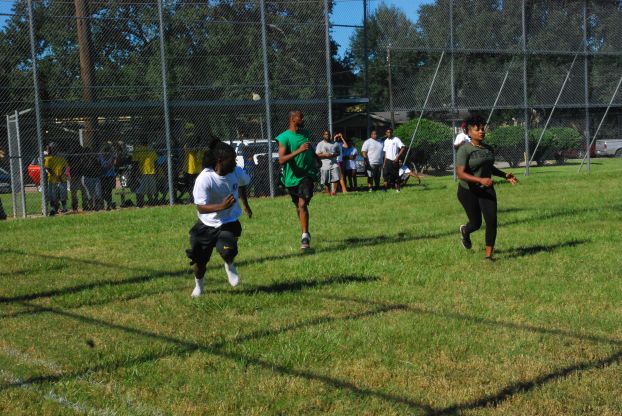 Dawn Burleigh/The Orange Leader A Bi-Annual Kickball tournament brought families and neighbors together as teams competed for a traveling trophy. #MakeItHappen’s next event is already in planning stages.

A first time Kick Ball Tournament hosted by #MakeItHappen on Sunday was a huge success.

As several teams competed for a traveling first place trophy, children played their own game of kickball near the playground. More children enjoyed the playground equipment.

The Orange Kickball Killers were declared the winner if the Bi-Annual event.

Harold Roy worked the sound equipment for the announcers.

Orange County Democrat Chair Deborah Mitchell and Bonnie Moses were on hand to register people to vote. Tuesday was the last day one could register to vote in the upcoming presidential election.

Team members came from as far away as Lake Charles to participate in the event.

#MakeItHappen is already making plans for the next family friendly event.

#MakeItHappen is currently working on becoming an official non-profit organization while working on shining a light on the positivity of the Orange community.

Along with bragging rights, the winning team also won a traveling trophy donated by Chystal Horn.

The group meets every third Sunday of the month. Those interested may contact Jason Platt or Bianca Garrett.

#MakeItHappen is in the process of becoming a non-profit group.