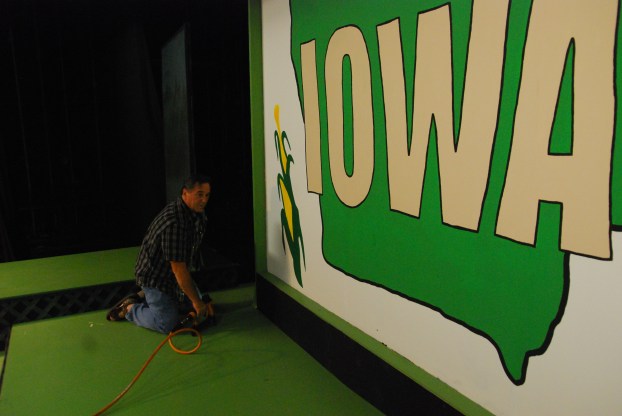 Dawn Burleigh/The Orange Leader Damon Gengo, director of Leaving Iowa, takes care of some last minute stage scenes in preparation of opening night on Thursday. Leaving Iowa will be performed at Orange Community Players theater at 7:37 p.m. October 13, 14,15 and Oct. 20, 21, 22, and with one Sunday matinee on Oct. 23 at 2:37. For reservations call 882-9137.

Gengo, an Assistant Director of Theater at Lamar State College Port Arthur, will debut with his first director position at OCP with the performance of a story of Don Browning, a middle-aged writer, who decides to finally take his father’s ashes to his childhood home, as requested. But when Don discovers Grandma’s house is now a grocery store, he begins traveling across Iowa searching for a proper resting place for his father.

“I saw the show about five years ago and fell in love with it,” Gengo said. “I had the opportunity to do the show at the campus. I had a lot of students at the time. It was done with 24 characters and is written about six.”

Gengo is looking forward to the OCP production.

“I always wanted to do the show with six actors,” Gengo said. “It is a difficult show to perform. I have the hardest working cast in the Triangle.”

Having over 17 directing credits to his resume, he has acted, directed and worked on set and light design in over 200 theatrical productions.

“While the show is about driving forward,” Gengo said. “It is really in the past.”

He also said people will walk away from the show feeling good.

“It is a unique journey,” Gengo said. “It is a family show which touches the heart strings of all family members.”

OCP is located at 708 West Division Street in Orange.