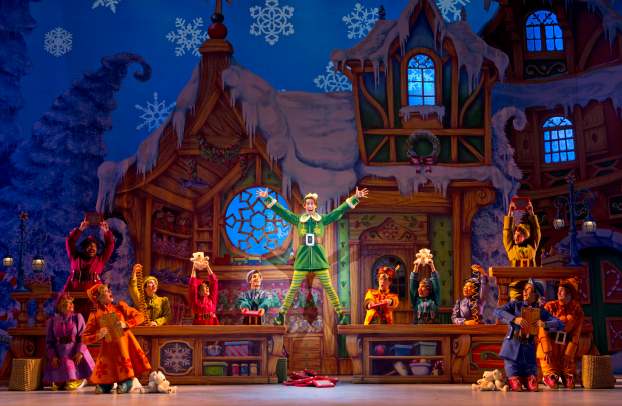 Photo courtesy of Lutcher Theater for the Performing Arts ELF The Musical, the hilarious tale of Buddy, a young orphan child who mistakenly crawls into Santa’s bag of gifts and transported back to the North Pole is scheduled for 3 p.m. and 8 p.m. Sat. Nov. 12, 2016 at Frances Ann Lutcher Theater for the Performing Arts located at 707 Main in Orange.

Lutcher Theater for the Performing Arts will present 13 incredible shows for the 2016-17 Performing Arts Season and season ticket packages of 4 or more shows are available online now. For the first time ever, Lutcher patrons will be able to log on to lutcher.org to create their own packages and order season tickets. Individual performance tickets will go on sale August 30, 2016.

The Lutcher’s 37th Season begins in fall 2016 with a Broadway favorite, that kicks off it’s national tour in Orange, Texas, and is followed by a diverse lineup of spectacular shows that promise something special for everyone:

A musical about a mother, a daughter, 3 possible dads, and a trip down the aisle you’ll never forget, over 54 million people all around the world have fallen in love with the characters, the story and the music that make MAMMA MIA! the ultimate feel-good show! The story-telling magic of ABBA’s timeless songs propels this enchanting tale of love, laughter and friendship.

THE SYMPHONY AT SHANGRI LA, Directed by Maestro, Chelsea Tipton, returns to Shangri La Gardens at the peak of Scarecrow Festival for a festive evening of seasonal nature and magnificent music! Bring lawn chairs and picnic baskets and soak up the alluring sights and sounds of autumn, the art of sunset, and a beautiful evening of Broadway hits! (This show is currently already on sale at lutcher.org)

ELF The Musical is the hilarious tale of Buddy, a young orphan child who mistakenly crawls into Santa’s bag of gifts and is transported back to the North Pole. Unaware that he is actually human, Buddy’s enormous size and poor toy-making abilities cause him to face the truth. With Santa’s permission, Buddy embarks on a journey to New York City to find his birth father, discover his true identity, and help New York remember the true meaning of Christmas. This modern day Christmas classic is sure to make all embrace their inner ELF.

Seen by millions across the globe, this worldwide smash hit tells the classic story of Baby and Johnny, two fiercely independent young spirits from different worlds who come together in what will be the most challenging and triumphant summer of their lives. DIRTY DANCING features the hit songs, “Hungry Eyes,” “Hey Baby,” “Do You Love Me?” and the heart-stopping “(I’ve Had) The Time of My Life.”

Grammy Winner, CHRIS BOTTI teams up with The Symphony of Southeast Texas for a grand evening of great Jazz and Symphonic hits. Having performed with Frank Sinatra, Natalie Cole, Joni Mitchell, Paul Simon and Sting, Chris Botti is now a major artist in his own right, performing worldwide and selling more than three million albums. His creative expression begins in Jazz and expands beyond the limits of any single genre. In 2013, Botti won the Grammy Award in the Best Pop Instrumental Album category.

BROADWAY CHRISTMAS WONDERLAND is one of the most delightful and enchanting Christmas shows ever. This most loved Christmas show features glittering costumes, a dazzling cast, and the highest kicking Chorus Girls this side of the North Pole. Start Christmas in style as Santa and his merry helpers take you on an unforgettable nostalgic Christmas journey.

Songs include “White Christmas,” “Winter Wonderland,” “Have Yourself A Very Merry Christmas,” “Chestnuts Roasting,” “Jingle Bells,” “Away in a Manger,” “Silent Night,” “Deck The Halls,” “Rockin’ Around the Christmas Tree,” “ O Holy Night” and many more.

PIPPIN is a high-flying, death-defying hit Broadway musical! Full of extraordinary acrobatics, wondrous magical feats and soaring songs from the composer of  Wicked, PIPPIN will lift you up and leave you smiling. Featuring sizzling choreography in the style of Bob Fosse and breathtaking acrobatics by Les 7 Doigts de la Main, this unforgettable new production is the winner of four 2013 Tony Awards® including Best

Musical Revival. Hailed as “an eye-popping, jaw-dropping extravaganza” (NY1), it’s unlike anything you have ever seen! Come experience PIPPIN, one young man’s journey to be extraordinary.

Venture back INTO THE WOODS as the Dodgers (Jersey Boys, Matilda) team up with

Networks (Phantom, War Horse, South Pacific) to present the acclaimed Fiasco Theater production that became New York’s surprise hit of this season. Unanimously acclaimed, extended twice at the Roundabout’s Laura Pels Theater, the Tony Award-winning musical classic by Stephen Sondheim and James Lapine has been mounted with boundless imagination. This witty and wildly theatrical re-invention is INTO THE WOODS like you’ve never seen it before!

Montana Repertory Theatre celebrates its fiftieth anniversary season with the play that put Neil Simon on the map over fifty years ago. Through comedy, Mr. Simon explores love, relationship, marriage, and family––the pangs of loss and the joy of reunion.

Corie and Paul Bratter are a newlywed couple. For their first home, they live in an apartment on the top floor of a brownstone in New York City. During the course of four days, the couple learns to live together while facing the usual daily ups-and-downs. Corrie wants Paul to become more easy-going: for example, to run “barefoot in the park.”

Direct from Broadway, this mind blowing spectacular showcases the jaw dropping talents of seven of the most incredible Illusionists on earth.  THE ILLUSIONISTSTM – LIVE FROM BROADWAYTM has shattered box office records across the globe and dazzles audiences of all ages with a powerful mix of the most outrageous and astonishing acts ever to be seen on stage.  This non-stop show is packed with thrilling and sophisticated magic of unprecedented proportions.

The quintessential backstage musical comedy classic, 42nd STREET is the song and dance fable of Broadway with an American Dream story and includes some of the greatest songs ever written, such as “We’re In The Money,” “Lullaby of Broadway,” “Shuffle Off To Buffalo,” “Dames,” “I Only Have Eyes For You” and of course “42nd Street.”

Based on a novel by Bradford Ropes and Busby Berkeley’s 1933 movie, 42nd STREET tells the story of a starry-eyed young dancer named Peggy Sawyer who leaves her Allentown home and comes to New York to audition for the new Broadway musical Pretty Lady.  When the leading lady breaks her ankle, Peggy takes over and becomes a star.

Directed by creator, Jaston Williams, GREATER TUNA is the hilarious comedy about Texas’ third smallest town, where the Lion’s Club is too liberal and Patsy Cline never dies. The eclectic band of citizens that makes up this town are portrayed by only two performers, making this satire on life in rural America even more delightful as they depict all of the inhabitants of Tuna — men, women, children and animals.

The show began as a simple party skit based on a political cartoon more than 25 years ago in Austin, Texas. Talented creators Joe Sears, Jaston Williams and Ed Howard were the imaginative authors that parlayed the sketch into a critically acclaimed production which has entertained audiences across the country ever since.

Winner of 8 2012 Tony Awards® including BEST MUSICAL, ONCE is a truly original Broadway experience. Featuring an impressive ensemble of actor/musicians who play their own instruments onstage, ONCE tells the enchanting tale of a Dublin street musician who’s about to give up on his dream when a beautiful young woman takes a sudden interest in his haunting love songs. As the chemistry between them grows, his music soars to powerful new heights… but their unlikely connection turns out to be deeper and more complex than your everyday romance. Emotionally captivating and theatrically breathtaking, ONCE draws you in from the very first note and never lets go. It’s an unforgettable story about going for your dreams and the power of music to connect us all.

Six of these thirteen events are scheduled for two performances, several of which offer matinee options.

The Frances Ann Lutcher Theater for the Performing Arts is located at 707 Main in Orange.

Coach had his hands full with this determined Mustang. Players lined up in single file waiting their turn to deliver... read more