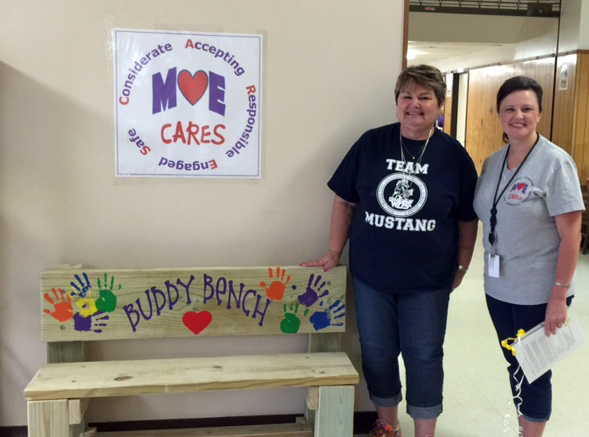 Mauriceville Elementary Principal, Buffy Knight, was surprised recently by the gift of a Playground Buddy Bench from Leadership Southeast Texas (LSET) – Class of 2016.

Christian Bucks, a then first grader from York, PA, is credited with starting the United States Buddy Bench movement. Buddy Benches are a place where children can sit on the playground when they feel lonely. Tied to citizenship and anti-bullying initiatives, students watch for peers sitting on their school’s bench, signaling their interest to play. Over 1,000 elementary schools across the world have Buddy Benches. They help create a more inclusive school climate when used as a part of a coordinated effort.

Buddy Benches can be tied to curriculum already being taught, such as citizenship, character education, and social skills. Specifically, Buddy Benches link to social studies TEKS for Kindergarten through fifth grade in the strands of citizenship, culture, and social studies skills, including critical thinking-skills, problem-solving, and decision-making. Buddy Bench use also ties to critical thinking, communication, collaboration, and creativity.