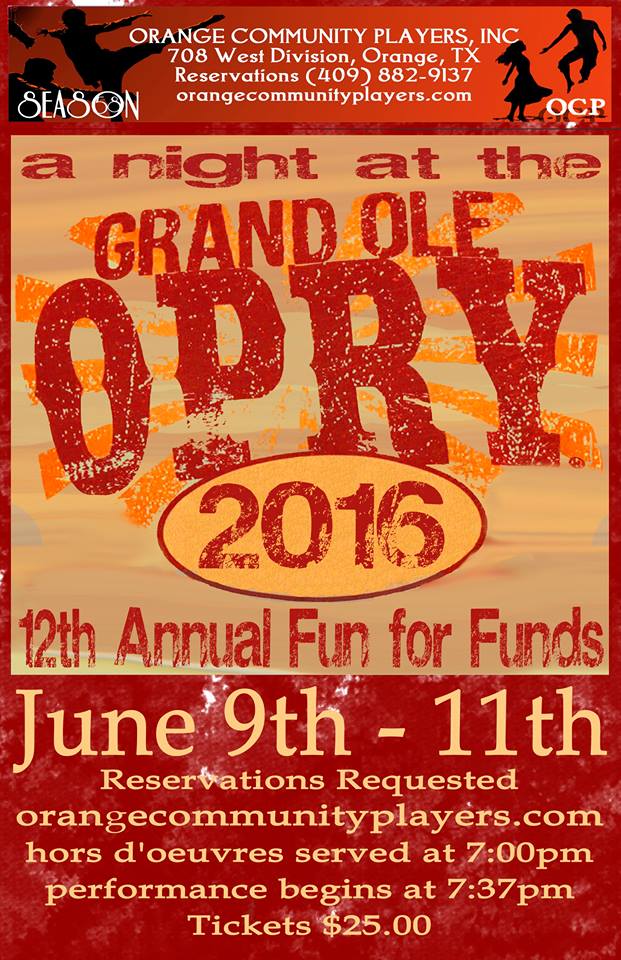 A Night at the Grand Ole Opry

The 12th annual fundraiser for the Orange Community Players is set to run three nights, June 9 – 11, 2016. This year will be a different format from other years. This year’s theme is “A Night at the Grand Ole Opry” and will feature classic country music. OCP has been fortunate this year to bring on board for the show Bob and Kimberly Manning. The Mannings are co-owners of Bourbon Haze Records, their independent recording label. They are both accomplished singers, songwriters, and performers. Kimberly has several albums on the Heart of Texas record label, as well as the Bourbon Haze label. Bob is currently producing “Bob Manning and the Honky Tonk Road Show”. Both of them are featured performers on the road show. They have several years experience in Nashville working with some of the major country artists, and producing shows on “The Nashville Scene”.

Bob will be serving as the MC/announcer for the show and bringing the Opry format and humor to the OCP stage. Kimberly will be one of the featured artists of the show. This show will bring to the OCP stage some outstanding new artists as well as some artists familiar to patrons of OCP.

Special to the fundraiser, there will be hors d’oeuvers prior to the theater opening and at intermission, as well as soft drinks, punch and wine. Serving will begin at 7 p.m. Showtime will be at the traditional 7:37 p.m. starting time.

Reservations may be made by calling the box office reservation line, 409-882-9137. Tickets price is $25. The theater is located at 708 West Division Street in Orange.