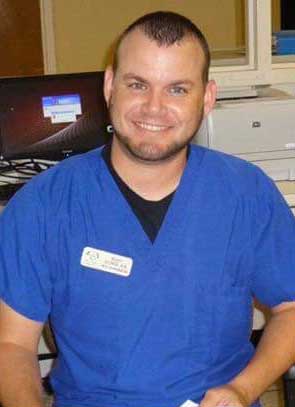 Funeral services will be 3:00 PM, Monday, April 18, 2016, at Claybar Funeral Home in Orange. Officiating will be Reverend Jeff Bell. Burial will follow at Orange Forest Lawn in Orange.

Born in Orange, Texas, on February 13, 1977, he was the son of Richard Paul George, Jr. and Margaret Ann (Shafer) George. Ricky attended West Orange-Stark and graduated in 1995. He was an avid trumpet player for the high school band and was very artistic. He worked at The Oaks and for Altus Hospice as a hospice nurse and would help out with fundraising. He was always willing to help out anywhere he could. He loved his family dearly. He was a wonderful father and he adored his children very much. Ricky was a huge Dallas Cowboys fan, an avid fisherman and everywhere he went he was the life of the party. He will be truly missed by everyone who knew him.

He was preceded in death by his grandparents, Richard P. George, Sr. and Lenora George; and uncle, Keith Geroge.

In lieu of flowers, memorial contributions can be made to the Alzheimer’s Association at 700 North St, Beaumont, TX 77701.