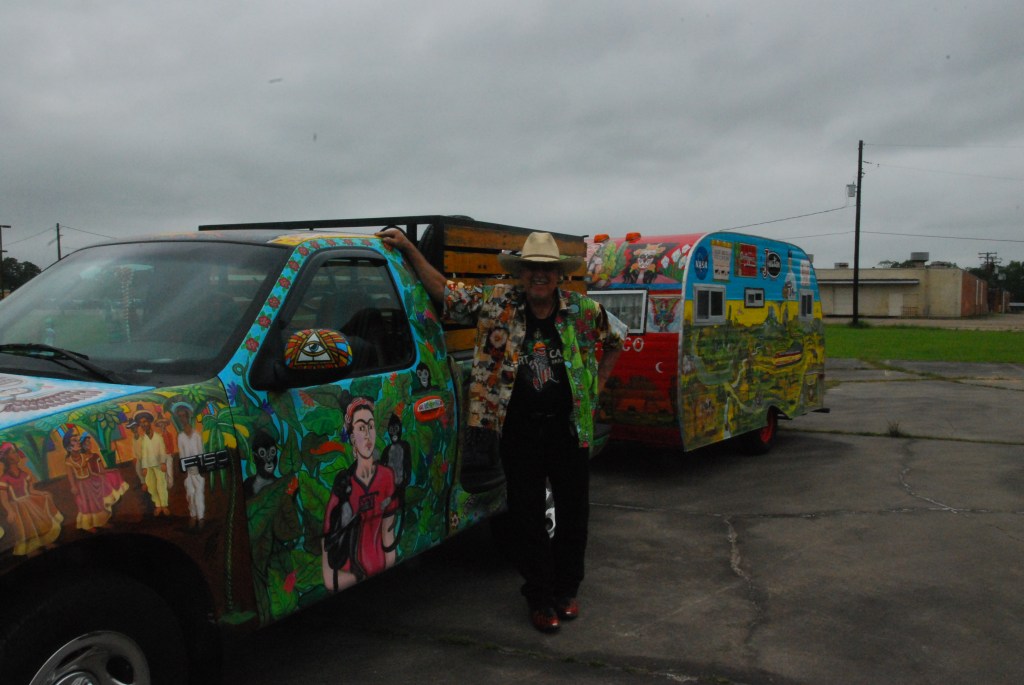 Dawn Burleigh/ The Orange Leader John Lea, a native of Orange, won the Mayor’s Trophy at the Houston Art Car Parade on Saturday.

Monday was full of congratulations as John Lea rolled into town with his colorful F150 and 1968 trailer aptly named ‘Don Burro y Gauchito’.

Lea had already planned to return to his native hometown on Monday for a quick hello and lunch with friends, however, he had one stop to make prior to the visit – riding in the Houston Art Car Parade.

The experience landed him the Mayor’s Cup, the Grand Trophy and $2,000.

“During the awards banquet they would announce best painted, best youth group, best daily driver,” Lea said. “I thought I just did not win, until they announced the grand overall prize. I am still in a daze. I never expected it.”

Lea is now invited to the Art Car parade in Victoria and Seattle.

“I have never picked up a paint brush,” Lea said. “But I have studied art and design mosaic tiles.”

“When I bought the trailer, it turned into a complete restoration job,” Lea said.

The interior of the trailer hosts a Mexican theme as well with a touch of Texas.

On the tailgate of the truck, a complete Mexican village is painted, complete with a flying UFO.

Lea’s friend, Miguel Orduna, is the artist who painted the designs Lea created.

Initially, the designs on the truck were created due to a dent on the truck Lea did not want to pay to have repaired. He started designing the images now seen on the vehicle and 14 days later Orduna completed the creation.

The trailer, purchased Feb. 1 of this year, was not actually completed until Saturday, the day of the parade.

With roots deep in Orange, Lea’s grandfather and great-grandfather served as Mayor of Orange, and a relative who served as District Attorney.

Lea now lives in San Miguel de Allende, Mexico when he is not traveling to see what next adventure the road brings.