The Hot Sardines Bringing it to the Lutcher Theater 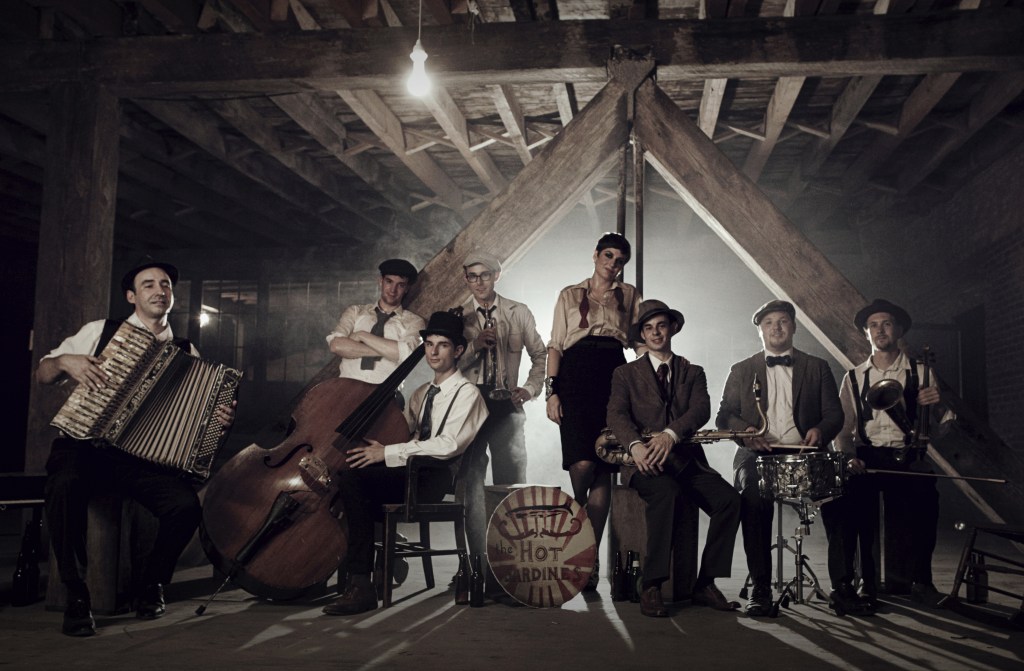 Bandleader and pianist Evan “Bibs” Palazzo and lead singer Miz Elizabeth combine with the Sardine ensemble of powerhouse musicians – and their very own tap dancer – to play hot jazz as it was in the era when live music was king. The outfit encompasses a blustery brass lineup, a rhythm section led by a stride-piano virtuoso in the Fats Waller vein, and Miz Elizabeth’s vocalizing in both English and French, with a voice that harkens back to another era yet feels refreshingly modern. The brainchild of Bibs and Miz Elizabeth, the Sardine sound fuses musical influences from New York, Paris, and New Orleans that were nurtured from the Prohibition era through the Great Depression, WWII and beyond.

“Greats like Fats Waller, Louis Armstrong, Thelonious Monk, Django Reinhardt, Count Basie, Fred Astaire, Mamie Smith, Billie Holiday, the Andrews Sisters, Ray Charles and a full-on melting pot of musicians both iconic and obscure have influenced our style and song interpretation,” says Miz Elizabeth, who helps fuel the Sardine mission to transform songs from another era into pop music for this century. Bibs shares that passion, and together they manage the delicate balance of showcasing old songs – some of them penned nearly a century ago – without being an “old-timey band.” Says Bibs, “We don’t treat this music with kid gloves, or place it on a pedestal to play it exactly as it was…We just play it…as if these songs were written this morning, for today’s generation.”

The irony of the Hot Sardines’ success is rooted in its origins: it was started by two non-musicians who never set out to form a band. Miz Elizabeth, who grew up living in several countries including France, Canada, and the Ivory Coast, sports a Masters Degree from the London School of Economics and spent her pre-Sardine life as a workaday Jane, creating web content and writing. Evan, born and raised in NYC, started playing piano by ear at age 3 and has flirted with amateur musicianship his whole life. His early education in the Waldorf Schools led him to major in theater and musical theater at the University of the Arts in Philadelphia. He became a working actor earning his living doing theater, commercials, and production work on films.

Frustrated with their career choices, they each were seeking a creative outlet. Then came the fateful day in 2007 when they both answered the same Craigslist ad for an open jazz jam in midtown Manhattan. Miz Elizabeth, who slipped out of her company holiday party at AOL Time Warner to be there, says that, “when Bibs and I met, it was like an instant musical connection.” Slowly over time, the band began to take shape.

The Hot Sardines sold out 15 straight shows during their residency at New York City’s famed Joe’s Pub, and showcased their versatility by performing to eager audiences at venues as diverse as André Balazs’ Top of the Standard (Boom Boom Room) in New York City, the Montreal Jazz Festival, the playfully-naughty underground speakeasy experience Shanghai Mermaid, and Symphony Hall in Boston, where they recently performed to sold-out audiences in collaboration with the Boston Pops.

This show is sponsored locally by First Financial Bank.

The Frances Ann Lutcher Theater for the Performing Arts is located at 707 Main, Orange, Texas.