LCM Board gives recognitions to students, staff Special to The Leader

Two students and one staff member were recognized during by the Board of Trustees at the regular January meeting of the Little Cypress-Mauriceville CISD School Board on Monday, January 11, 2016. LCM High School Sophomore, Chris Bilbo, was recognized by Dr. Hargrove for his beautification project of the Little Cypress Elementary campus, which was Chris’s Eagle Scout project. 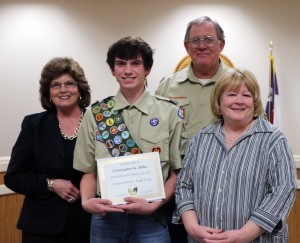 Eagle Scout Chris Bilbo is flanked on his right by Dr. Hargrove and his left by grandparents Chris and Paula Wright as he was recognized by the Board at Monday night’s meeting

Athletic Director Randy Crouch introduced freshman Eli Peveto who was recognized for his success in cross country this year. Eli was named Supergold in Cross Country in December by the Beaumont Enterprise.  His season included wins at six cross country meets, including District, a 13th finish at Region and he was the highest freshman finisher in the 4A State competition. His fastest time was 16:38 in the 5k race (3.1 miles). Of all returners next year, his time ranks him 12th in the state. Just recently, he posted a personal best of 4:41 in the mile. Coach Crouch mentioned that he is looking forward to seeing what Eli accomplishes throughout his high school career. 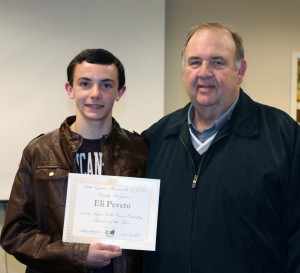 The Board also welcomed Sherri Ellis, a transportation employee who was named 2016 Bus Driver of the Year by the Property Casualty Alliance of Texas (PCAT). According to PCAT, “School bus drivers set the tone for children’s daily experience…they are the first person children see in the morning and the last they see in the afternoon…it’s not a job, it’s a calling.” In his introduction of Ms. Ellis, Assistant Superintendent Greg Perry told the group that nominations are evaluated based on five attributes: leadership, attitude, perseverance, student and parent relationships and technical skills. Besides an exceptional driving record, Mr. Perry said that Ms. Ellis had never missed a day of work and there had never been a complaint filed against her. 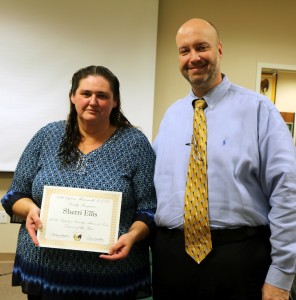