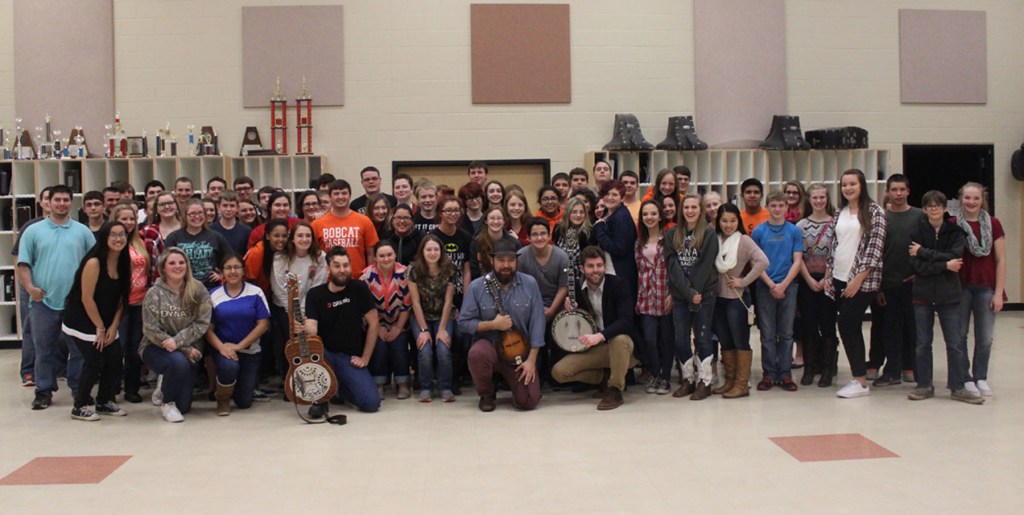 ORANGEFIELD — A contemporary bluegrass band, the Hillbenders, visited the Orangefield High School band and choir students on Tuesday, February 2.  The Hillbenders traveled to Orange to perform at the Lutcher Theater, but also treated OHS students to a glimpse at their music and life as a musician.

“It was an interesting cultural experience.  I really loved it,” said senior, Justin Dupuis.

The students listened to the band perform a few songs.  They also asked questions of the musicians to learn more about their instruments and playing music.  The instruments featured were the mandolin, banjo, and dobro.  After the performance, the students looked at the instruments up close.

“My favorite part was when I got to play the dobro,” said junior, Dexter Mize.

In a press release from the Lutcher Theater, it says that The Hillbenders are one of the few bluegrass groups that recognize their ability to bridge the gap between the common music consumer and the bluegrass genre, selecting material that defies any hillbilly stigmas.  With their widely varied influences, they are trying to bring to bluegrass, songs that unify.

“We wanted to pair bluegrass with the other music we grew up with—rock and roll!” said Hillbender Nolan Lawrence.

The students were captivated by the Hillbenders’ musical style, instrumental talents, and voices.

“It was phenomenal and I really enjoyed it,” said freshman, Porter Welch.

Teacher of the Month