Engineering is the focus of first-generation LU student Thanh Tsan 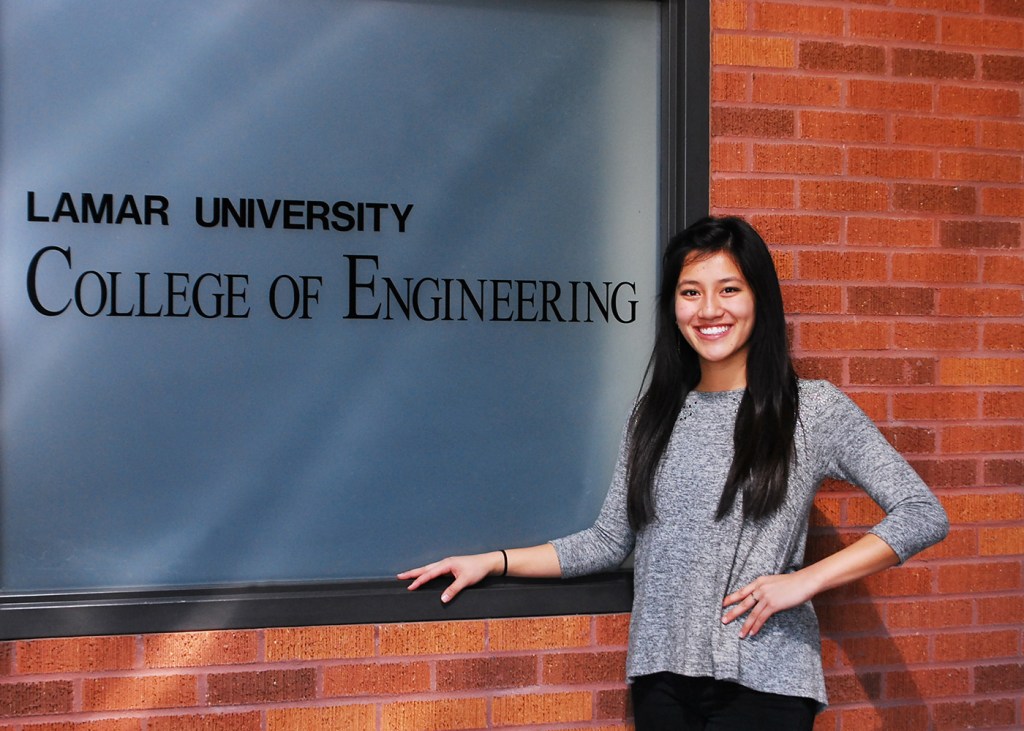 Thanh Tsan of Orange has found her niche at LU after only one semester. The 18-year-old says that one of her college goals was to make new and diverse friends, and the community offered by Lamar University has surpassed her expectations.

“I’ve made friends from Argentina to India. I am in the Rec at least twice a week, and there is always a group of people there too. We have all become really good friends. I’m so happy with my choice to come to Lamar,” Tsan said.

Tsan is a first-generation student, and her upbringing has contributed to her unique outlook on life. Peers notice that her mature perspective is uncommon at such a young age.

“As a first-generation student, growing up early was just a part of the process. As you grow up you realize that your talents would be wasted if you don’t use them to benefit yourself or your family, and even the world, in the bigger scheme of things. I had to prioritize my life earlier than most people my age,” she explained.

“I have talked to other engineers who have supported my decision too. They always say the same thing: ‘If you can take being the minority, gender-wise, then being a female engineer is worth it,’” Tsan said.

Tsan holds that her successes, such as her 4.0 GPA, are due in part to the efforts of her parents. “They are my motivators,” she said, “and their hard work gave me all the opportunities I’ve had. They are the reason I am who I am today.”

However, Tsan admits that her major has proven a challenge. She has forced herself to overcome her tendency to procrastinate and even cut back on her favorite recreational activities, like Ping-Pong, when work started piling on. “At the beginning of the year I was [playing Ping-Pong] every day. I limit myself to two days a week now,” she said.

The freshman plans to make the most of her education at LU. She is considering a double major in math, and she’s also interested in learning more about prosthetics. LU’s study abroad program has inspired her to dedicate one future semester or summer to studying abroad, during which time she hopes to determine her compatibility with a new location as she considers a career as an international citizen.

Tsan wants to co-op or intern with a major company during her college years to see what her major is like in the “real world.” Hands-on experience would give her “the opportunity to get a deeper respect for mechanical engineering and a chance to network and to meet other people who were once in my shoes.”

She is currently a member of LU’s Honor’s College which she believes helps her to stay focused on academics while also having fun. She is on the President’s List for her achievements and is the recipient of the Southeast Texas Legends Scholarship, one of the endowed scholarships begun by the Beaumont Foundation of America at LU to honor Southeast Texas leaders, and the Smith-Hutson Scholarship, one of the university’s most generous scholarship funds focused on creating educational opportunities for Texas high school graduates pursuing baccalaureate degrees.

She also receives the LU Cardinal Scholarship, the Keown Foundation Scholarship and the Houston Livestock and Rodeo School Art Scholarship. Considering her plans for studies abroad and an internship, she plans to graduate in May 2020.