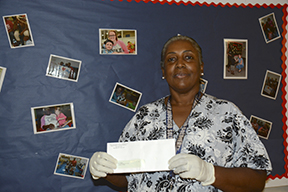 West Orange – Cove Superintendent Rickie Harris spent his day Monday walking through each of the District’s five campuses. He moved quickly from door-to-door at each campus. He also met collectively with the staff members of the transportation department and Educational Service Center. Harris was doing his best to meet personally with as many of the District’s 400 employees as possible. He was intent upon delivering an important message and $145,500 in retention incentive checks.

Harris said, “Today was an exciting day for me. I visited campuses, met with individual staff members, and personally thanked our returning employees for choosing to continue to serve as Mustangs. With this personal thanks, I also distributed tokens of the District’s appreciation.”

During the 2015-2016 budget process, Superintendent Harris and the WOCCISD Board of Trustees recognized budget limitations and the resulting inability to provide raises for all staff. In identifying this challenge, the Team of 8 pre-planned a surprise retention incentive to be delivered prior to the holidays.

The incentive was delivered, with no announcement, on Monday, Nov. 16.

Individuals new to the district who started work on or after July 1, 2015, received a token appreciation gift and Harris’ personal encouragement to make WOCCISD an extended career.

After receiving her check, North Early Learning Center custodian Nina Reed said that this was “the best Monday ever!”

Angel Istre, an aide at North Early Learning Center, said, “I was very surprised and excited! I thought that it was very thoughtful of Mr. Harris to hand deliver the surprise to us personally. I am PROUD TO BE PART OF WEST ORANGE-STARK MUSTANG FAMILY!!!

At the end of the day of surprise visits, Superintendent Harris sent an email to staff, “I value each and every one of you. I love being a Mustang and believe that we have an outstanding team. We are empowering lives through excellence everyday!”