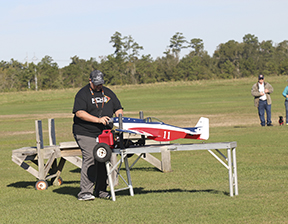 Dawn Burleigh/The Orange Leader Chris Somers, contest director and secretary of the Orange County Radio Control Club, readies his plane during a fly-in on Saturday in honor of Veterans Day.

Orange County Radio Control Club held a special fly-in on Saturday to honor those who have served our country.

Members of the Orange County Radio Control Club can be found at the Model Air Park, 10623 Farm to Market Road 1442 in Orange, on Tuesday and Saturday mornings as new and older planes are flown.

Saturday, the club hosted a special Fly-In for veterans.

“Now I am an air traffic controller,” Somers, of Orange, said. “I work and play airplanes.”

The club is continuously growing according to Somers.

“Today [Saturday] is in honor of Veterans Day,” Somers said. “We donated $1,300 in August to the Wounded Warrior Program.”

Fees collected during fly-ins are directed towards field maintenance.

The club also hosts a boat ramp for remote controlled boats and pontoons.

“We are seeing an increase in boats,” Somers said. “We also build custom docks.”

Somers also said one of the newest members resides in Sulphur, Louisiana.

“Before joining, he was driving to Houston,” Somers said.

The organization has a history of emphasizing safety and the group has had zero injuries for several years.

To stay within permitted standards, planes at the park have to be kept at 200 feet or less, or what is called a visual flight.

The Orange County Radio Control Club officially meets at the airpark on the first Saturday of the month, rain or shine. Visitors are welcome at the park as long as a member of the club is present.