King, Longhorns get past Bobcats 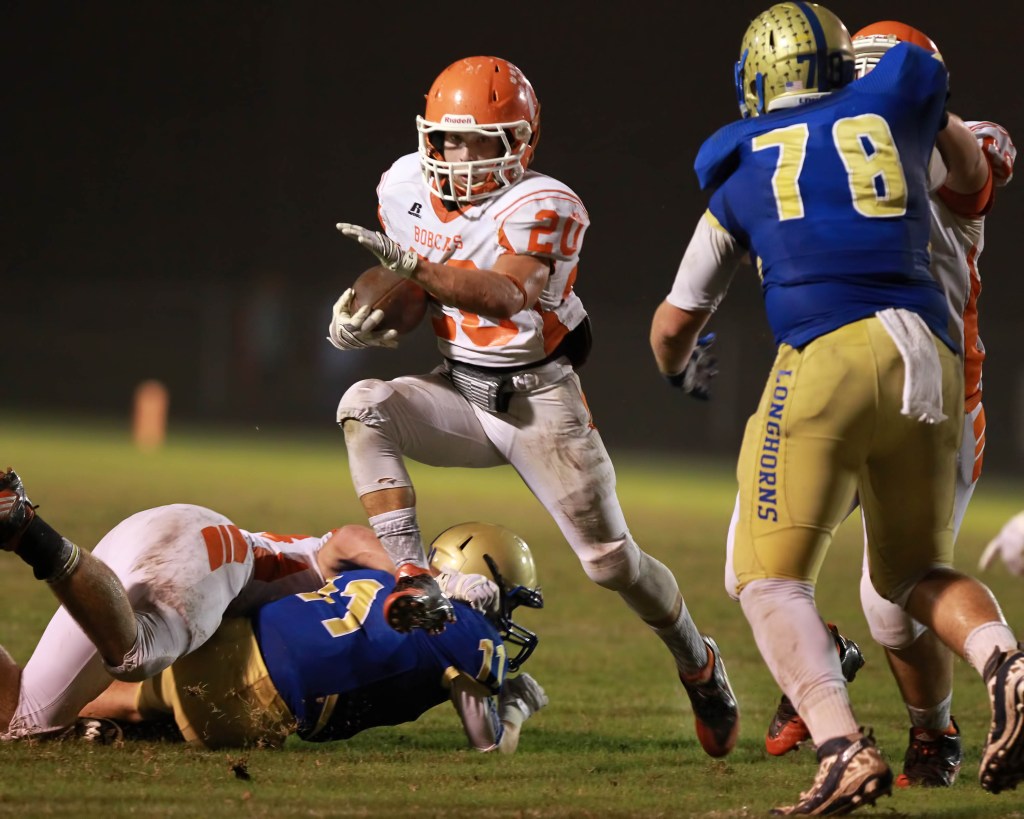 HAMSHIRE — Kendrick King and the Hamshire-Fannett Longhorns did not let thick fog stop their running attack as they stole second place in District 9-4A Division II from the Orangefield Bobcats Friday night.

King stunned the Bobcats with six touchdowns and 205 yards in the 48-35 win.

The Bobcats (5-5, 2-2) shouldered the Longhorns (7-3,3-1) offense on their first possession forcing the only Longhorn punt of the night.

The punt fell into the arms of Matthew Watkins who slipped past defenders for a 52 yard return down to the Longhorn 28. It took the Bobcats just 48 seconds to put the first points on the board. Tristan McGee snuck around the right side to tip-toe the sidelines for a 24- yard score for an early 7-0 lead.

The lead was short lived as the Longhorns went right to work with Tyrese White rumbling for a 54-yard score just two plays later to tie the game.

The Bobcats’ pushed right back on the ensuing possession. Watkins led an 80 yard drive capping it with a 12 yard touchdown run to push the Bobcats up 14-7 after the first quarter of play. Watkins finished the night with 149 yards on 14 carries.

Hamshire-Fannett opened the second quarter with excellent field possession near mid-field at the 48 yard line. Following two big runs by White, King would scoot in from the one yard line for his first score of the night to tie the game at 14.

Orangefield again started with a long field and worked the Horns’ left-to-right. The 81- yard drive was polished off with Christopher McGee launching into the secondary to escape defenders for a 17-yard touchdown run and return the lead to the Bobcats, 21-14.

Hamshire and King continued to work over the Bobcats well into the second quarter. King notched a 24-yard touchdown with 3:33 left in the first half to again tie the game. The Longhorn defense answered the call on the following Bobcat possession stopping the Cats’ and forcing a turn-over-on-downs at the Orangefield 16. King again slipped in the end zone from seven yards out for his third touchdown of the half as the Longhorns led 27-21 at half-time.

Orangefield received the second half kickoff and Tristan McGee coughed up the ball giving the Horns’ the ball at the Bobcats and much needed momentum only up by one score. King toted the ball four times to set up his fourth touchdown from a yard out and putting the Bobcats in a 34-21 hole.

The Bobcats next possession started at their own. Four plays later, Watkins torched the defense around the right side for a 63-yard touchdown to pull within a score at 34-28. The Bobcat crowd was quieted within moments, however. King continued his huge night with a 32- yard keeper around the left side to extend the Longhorn lead to 41-28.

Watkins would throw an interception to end the third quarter. The Longhorns’ kept churning as King put the crown on his night with his sixth touchdown run. He’d walk in untouched from 11 yards out just seconds into the fourth quarter.

Orangefield never fell back and kept rolling ahead. Christopher McGee got his second score of the night from 40 yards as the Bobcats trailed 48-35 with the game just too far out of reach with under five minutes remaining.

The Longhorns piled up 339 yards in the final district game. Bobcats will slip into third place in the final district standings with Liberty taking the fourth and final spot after beating Hardin Jefferson Friday night. Orangefield will play Houston-Worthing a team they seen earlier in the season and lost by just four points.

The Bobcats will take on Worthing next Thursday at 7:30 p.m. at Barbers Hill High School.

“I think it benefits us to play Houston-Worthing again,” Bobcats head coach Josh Smalley said “Our boys are gonna be excited at the chance to play them again.”