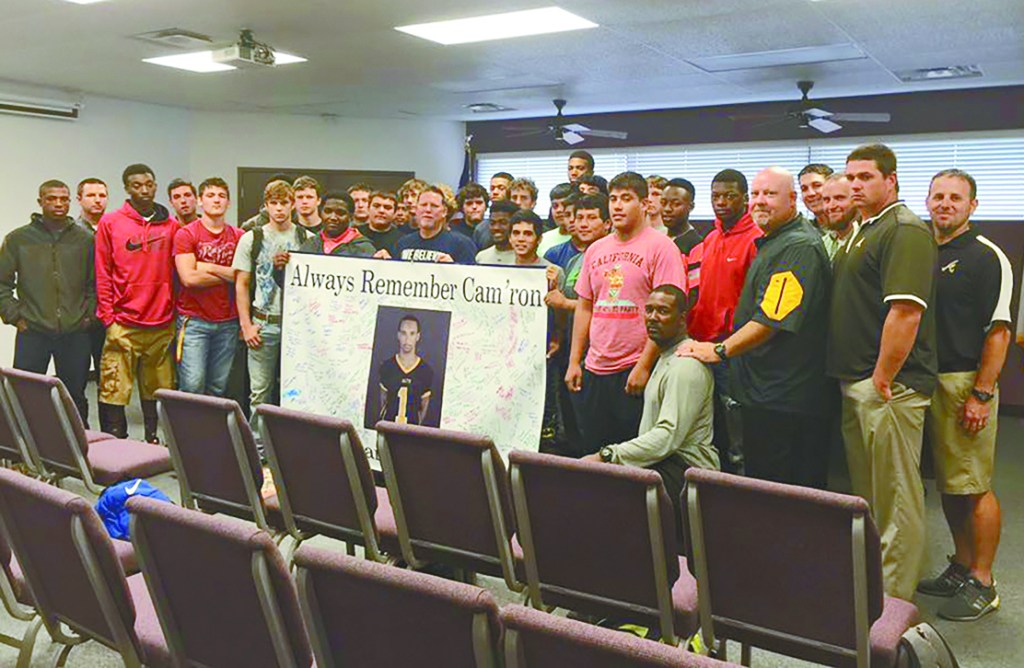 Photo courtesy of WO-S West Orange-Stark presented Alto High School a banner in honor of Alto defensive back Cam’ron Williams, who passed away last Saturday after collapsing on the field Friday night.

It has been a little more than five years since the tragic death of West Orange-Stark quarterback Reggie Garrett after he collapsed on the sidelines in a game against Jasper.

Cam’ron Williams, a junior for the Yellow Jackets, died Saturday after collapsing during Friday night’s game.

Williams actually told teammates that he was having some dizziness issues and he ended up collapsing and was airlifted to a Tyler hospital where he passed away the next day.

West Orange-Stark High School immediately got involved with sending a message to Alto High School that the Yellow Jackets were not alone.

Students of WO-S wanted to show their support Alto by sending them a banner of Mathews, along with signatures of notes and condolences.

Local Orange business man Tony Dallas, of Dallas Insurance, made the trip to Alto to deliver the banner along with some Mustang players.

Doctors say the 16-year-old Matthews died of an aneurysm.

The flags outside the Alto ISD campus are at half-staff.

“You want someone for your kids to follow up in their footsteps and emulate, Cam’ron was the one,” Alto ISD Superintendent Kerry Birdwell said.

Head football coach Paul Gould says this is the first time this has happened to one of his players.

“Emotions are everywhere, we want to be here for our kids. They are definitely dealing with something that a 16,17,18 year old doesn’t usually have to deal with,” Gould said,

This tragedy has brought the small Alto community together, something Gould says Cam’ron’s teammates are thankful for