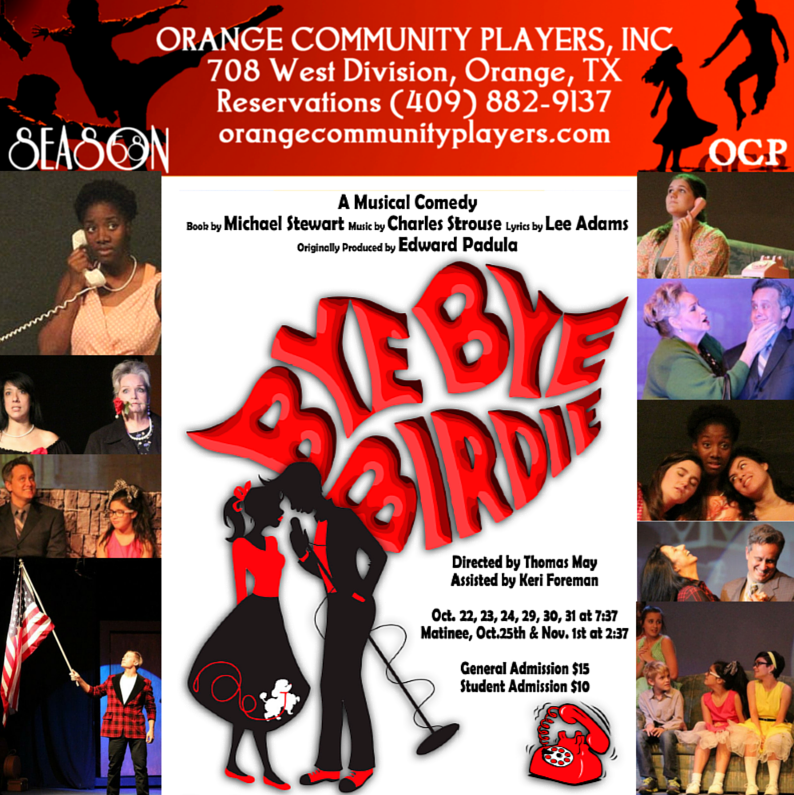 Bye Bye Birdie opened on Broadway in 1960 thanks to funding provided by L. Slade Brown of Orange. It was one of the biggest hits of the year. Birdie was nominated for 10 Tony Awards and won five, including Best Musical. The play was sold to United Pictures and the 1963 movie version launched the careers of Ann Margaret and Paul Lynde, and gave a boost to the careers of Dick Van Dyke and Janet Leigh.

Birdie was produced on the OCP stage in 1963 and again in 1991. It is set to open for the third time on October 22 for a total of eight performances. This production will be the most unique of the three. There is talent from all three Golden Triangle community theaters.

The director is Thomas C. May of Nederland. May is an experienced veteran of both acting and directing roles at the Port Arthur Little Theater. He has also been involved in productions at OCP including acting in last season’s Sweeny Todd and directing Shipwrecked.

Serving as Assistant Director is Keri Foreman. Foreman is a versatile veteran at OCP. In addition to singing and dancing, she is the artist that is responsible for the marquees for each production.

Leyni Illa-Petersen volunteered to be the choreographer for the show after taking the role of Rosie Alvarez. She is an accomplished dancer as well as being an instructor in a Mid-County dance academy. Her love interest in Birdie is her real life husband Chad Illa-Petersen. He is playing Albert, Conrad Birdie’s manager. Torn between his controlling mother and his desire to marry Rosie, along with his meal ticket Birdie being drafted, Albert has his hands full.

Chad and Leyni met while performing at Beaumont Community Players. Both have extensive experience at BCP and are happy to have a chance to play opposite each other for the first time on stage.

Bye Bye Birdie is based loosely on the drafting of Elvis Presley. Conrad Birdie is a famous rock and roll star that drives teenage girls wild and makes the older ladies swoon much to the frustration of the boyfriends and husbands. It is a feel good comedic musical that showcases the singing and dancing talents of its young cast. Birdie has the largest cast of the year and one of the youngest. This show is the first stage opportunity for several of the cast members and they are producing a great show.