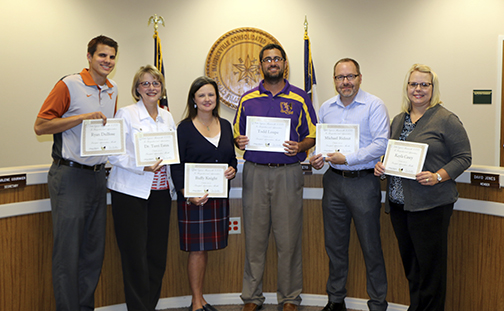 During the regular October meeting of the Little Cypress-Mauriceville Board of Trustees, the Board recognized principals from each of the District’s six campuses. Superintendent, Dr. Pauline Hargrove, told the Board that principals are asked to do so much in their role as the campus leader. “They are in charge of assuring our students receive a world-class education. I’m proud of the principals we have in this District,” said Hargrove.

Dr. Hargrove asked each principal to tell the Board about their tenure with the District. Mauriceville Elementary’s Buffy Knight has been the Principal for 10 years, Assistant Principal of MVE for four years, and taught at MVE seven years. Todd Loupe, principal of Mauriceville Middle School has served in that position for eight years. He also served as Assistant Principal at both LCM High School and Little Cypress Junior High, as well as being one of the homebound teachers prior to going into administration.

Trustee Tammy Rountree told the group, “I am happy to say my own children have been touched by each one of these people during their time at LCM CISD.”

In the business portion of the meeting, Greg Perry, Assistant Superintendent, told the Board that the District had received a perfect score on “Schools FIRST,” the annual Financial Management report.

Also of note, Dr. Hargrove reported that District enrollment is at 3,360, 39 students above last year’s enrollment at this time, and the attendance rate is at 96.53-percent.